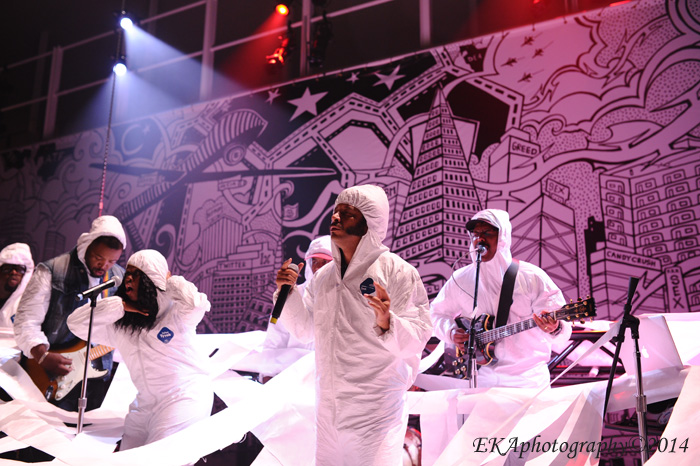 Billed as a haunted-house/funhouse/live concert/performance art piece, “The Coup’s Shadowbox” delivered on all fronts. The show, whose world premiere took place August 16 at SF‘s Yerba Buena Center for the Arts, was an immersive aural and visual experience, built around a live Coup performance, which never let up for even a minute. 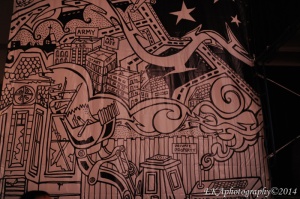 Upon entering the YBCA auditorium, attendees were greeted by dystopian cityscapes drawn by John-Paul Bail, a printmaker and radical artist known for making and distributing thousands of free posters during the Occupy Oakland movement. Bail’s art, which embraces a low-tech, simplistic aesthetic, was a hyperrealistic, incredibly-detailed depiction of present-day San Francisco and contemporary America with all its glitz, glamour and makeup stripped away, revealing a society dominated by corporate interests and the military-industrial complex. Every panel told a story of greed prioritized over human need, from the bulldozers ripping up old Victorians to make way for overpriced techie condos, to the sign advertising “Bank of Apartheid – since 1904.” Though the panels had sort of a “Metropolis”-esque/cyberpunk thing going for them, there was nothing futuristic about Bail’s message, which seemed to say, these are the times we’re living in NOW, whether we realize it or not. Ramming that message home were cut-outs of drones and Stealth bombers which casually dangled from the ceiling.

In front of the main stage, on whose background Bail had illustrated a large panel, a large, cube-like white monolith stood. As every eye looked on, a driving funk/rock groove started to emanate from the cube, which receded to reveal The Coup, dressed in white jumpsuits like astronauts – or, in frontman Boots Riley’s case, an Afronaut. The gesture was an obvious nod to Parliament-Funkadelic’s mothership, and suggested that the band had come from the far reaches of the galaxy to help us get a clue before all hope was lost.

Things only got more surreal from there.

The band shod their jumpsuits for street clothes, or in Riley’s case, a dapper brown plaid suit with light brown leather boots. Riley stands under six feet, even with his signature Afro, but he might as well have been the tallest man in the room, based on his stage presence. He strutted, swaggered, shimmied, shook, and gesticulated with the magnetic charisma of a chitlin circuit soulman who’d finally made it to the Apollo.

“We came to fonk,” he announced at one point, with a dead-serious look in his eye.

And fonk the Coup did, tearing through a fair portion of their six-album catalog with boisterous upswing. Each band member seemed on point as old songs were given new arrangements, extended jams segued into entirely different tunes, and Riley the ringleader was matched in his intensity level by the sidemen.

20 years ago, when the Coup were just starting out, Riley was a rapper with a message in an era defined by an underground hip-hop spectrum which ranged from ghetto gangsta to Afrocentric revolutionary. Two decades later, hip-hop is far less revolutionary as a genre overall, yet he still carries the same message. Riley has become an icon of radical social activism who also happens to be entertainer; he can no longer be considered ‘just a rapper.’ He’s more of a messenger who conveys his statements through rapping, over a musical template which has evolved from basic sample-and-loop aesthetics to incorporate more live instrumentation and amalgamate more  genre influences, from new wave to indie rock to both James Brown and Prince-style funk.

going to a Gitmo go-go

For longtime fans, the set list must have seemed like manna from heaven. It included mostly uptempo numbers, among them “Gods of Science,” “5 Million Ways to Kill a CEO,” “Gunsmoke,” “My Favorite Mutiny,” Everythang,” “Strange Arithmetic.” “We Are the Ones,” “Magic Clap,” “Fat Cats, Bigga Fish,” and covers of Talking Heads and Lou Reed songs –all performed like the countdown to Armageddon had sounded, and there was no tomorrow.

A few minutes later, Riley pointed to his right. Lights went up, illuminating a side stage where electronic music trio Mortar and Pestle had set up. Shifting the audiences’ attention like that was a clever move; it forced attendees to consider the space they were in, and perhaps to absorb Bail’s installation art more carefully. Following that interlude, Riley kept the energy level high by introducing vocalist Silk-E, who led the crowd through a raucous version of “Show Yo Ass.”

Like most of The Coup’s songs, the lyrics are still relevant:

You’re voting which you’re hoping
will stop the guns from smoking – is someone fucking joking?
They’re bankers in sheep’s clothing
I know places where the kids keep croaking
Lacking the essential vitamins and protein
Hustlin and hyphy are eloping
I’m the best man bustin shots and toasting

The song’s chorus is, like much of The Coup’s catalog, a call to action:

The audience’s eyes were again directed away from the main stage, as a four-piece string section (members of Classical Revolution), bathed in red lighting, added violins and cello to “Laugh, Live, Fuck” as the video projection superimposed a heart against the main stage.

That was followed by the puppeteers of Eat the Fish, who pantomimed with figurines of the band members and a Guantanemo go-go dancer as Riley and the band hit with the recent single and video, “Your Parents’ Cocaine.” Kazoos were distributed throughout the crowd, and some guy threw fake money and bindles into the audience, as Riley related an ironic tale of white powder and white privilege:

Your daddy gon’ make you VP of sales
Don’t mix good shit with the ginger ale
Pacific Heights ain’t Sunnydale
You could murder somebody and be out on bail
Your mom’s Amtrak- she’s on the rails
So many bumps thought it was Braille
One day, we’re all gonna tip the scales
Cuz me and my crew are too big to fail

The puppets were hard to top; just about the only thing which could have done so was… a N’Awlins-style second line, courtesy of Extra Action Marching Band, who made their way through the audience, tuba blaring at full bleat. The surprises kept on coming; the side stage again lit up, and Snow Angel, a folk/power-pop outfit distinguished by electric sitar player Gabby La La, stole the spotlight. 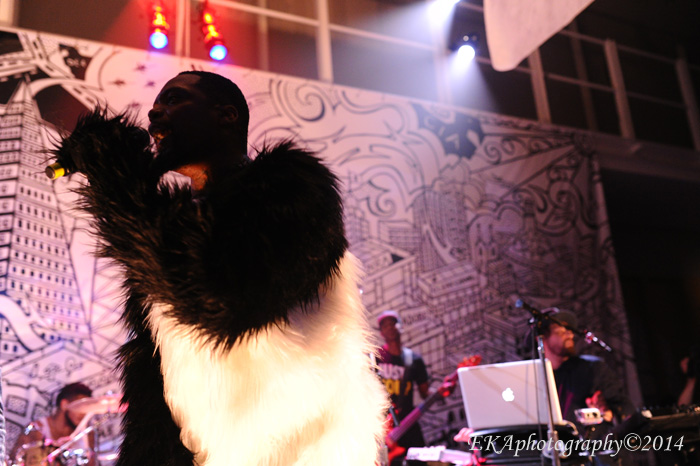 That’s M-1 of dead prez in the panda suit

Pick a Bigger Weapon faves “Monkey Off Your Back” and “Ass-Breath Killers” followed,  but before anyone could catch their breath, a man in a panda suit appeared on stage and took off his mask to reveal… M-1 of dead prez, who performed his best-known song, the anthemic “Hip-Hop”:

In the real world, these just people with ideas

Again the real world, it’s bigger than all these fake-ass records

Where poor folks got the millions and my woman’s disrespected

Just when you thought you’d seen it all, singer-songwriter Bhi Bhiman popped up amidst some scaffolding on the back wall opposite the main stage with an acoustic guitar. Bhiman performed “Up in Arms,” a poignant song about the death of Huey Newton, which imagined Newton’s thoughts at seeing the reversal of the social justice gains he fought so hard for. 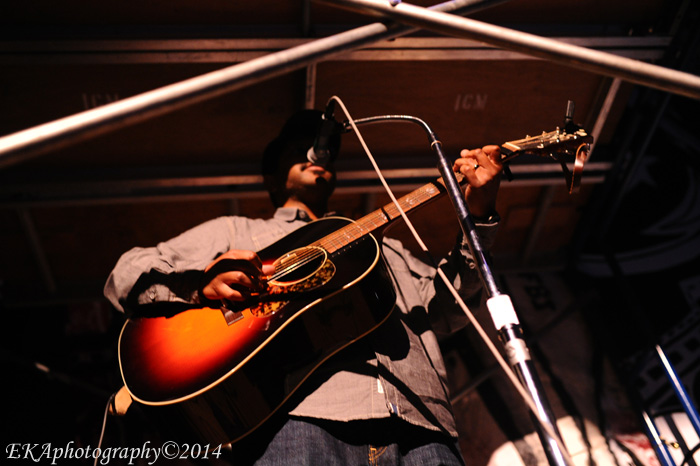 Not long after that, Riley appeared in the same scaffolding nook, wearing a fedora. A strategically-placed front grille of an old American muscle car became a prop. Aided by more strings from Classical Revolution, he closed the night with a rendition of the classic “Me and Jesus the Pimp in a ‘79 Grenada Last Night,” working his way through the crowd before returning back to the stage to take the band through the grand finale. 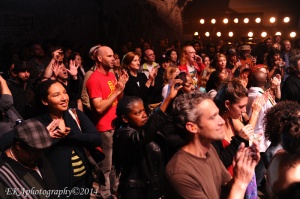 Suffice to say, The Coup’s Shadowbox was an engaging, entertaining, thought-provoking show. Riley went so far as to say it was his “favorite Coup show yet”, while YCBA’s Marc Bamuthi Jacobs noted the show was the first to use every single plug on the venue’s soundboard. It was less than a theater piece or a performance art work than it was a concert with elements of both, but it worked. It’s easy to recommend it as something to keep audiences enrapt in this age of short attention spans, and one hopes it will play more, and possibly national, stages at some future point in time. -EKA

2 thoughts on “Never A Dull Moment: The Coup’s Shadowbox”