Now in its sixth year, the Oakland Underground Film Festival celebrates independent, DIY, and otherwise non-mainstream cinematic fare. It’s one of many Oakland-centered film festivals which have popped up in the past few years; some of the others being the Oakland International Film Festival and the Matatu Film Festival. The emergence and co-existence of these festivals supports the idea of Oakland as a city which appreciates non-standard, un-Hollywoodized movies, many of which deal with subject matter which rarely makes it onto cineplex screens.

A quick glance at this year’s OAKUFF schedule shows there’s plenty of celluloid diversity to go around, from the opening night double bill of “The Infinite Man,” a time-travel romcom, and “Falcon Rising,” a black martial arts actioner set in Brazil featuring yakuzas;  to subsequent screenings of “Que Caramba Es La Vida,” a documentary about women mariachis in Mexico; “Lost Landscapes,” a collection of archival footage of Oakland through history; three programs featuring short films; “Out in the Night,” a documentary about “killer lesbians”  which examines race, gender, crime, and mainstream media narratives; and “Giuseppe Makes a Movie,” a comedy about an independent filmmaker trying to make a feature, despite having no budget. The festival runs Sept. 25-28; the complete festival program is here ; all screenings are $10.

What follows is a Q &A with Kahlil Karn, OAKUFF’s Director/Founder, who explains his motivation for presenting the festival, the logistical challenges inherent in such an undertaking, and how the festival fits into Oakland’s cultural mix.

KK: OAKUFF’s mission is to serve fresh independent and unconventional films and film events to one of the smartest and most dynamic audiences in the world. Cinema that speaks to the culture and character of the Oakland, the East Bay and beyond. 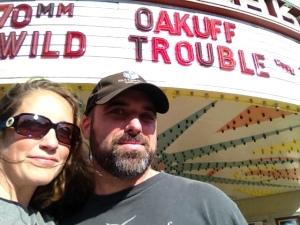 Oakulture: The festival is now in its sixth year. What were some of the highlights of previous festivals?

Oakulture: OAKUFF is a labor of love and a grassroots effort. How much do the organizers really have to love these kinds of movies to put the festival on every year?

KK: Members of our all-volunteer staff work at Sundance, Frameline, Mill Valley, Jewish, Latino, and San Francisco International film festivals and have other jobs in media and art as well and they all give hundreds of hours a year to put OAKUFF on because they love Oakland and what it stands for and they love movies and the power of cinema. There is no financial reward but there is massive joy in connecting with your community and helping shine a light on some of the most fabulous aspects of living in the Bay. 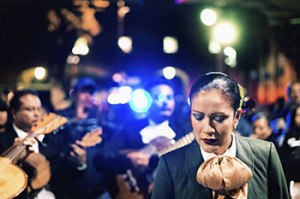 Oakulture: What’s the biggest challenge in presenting the festival every year?

KK: We have not entered any agreements with corporate sponsors and yet we make great efforts to host a festival with relatively high production value and an exceptional audience experience. We are lucky to be sponsored by the East Bay Express for some print advertising, but we rely heavily on grassroots and word of mouth to get the word out about the festivals. If folks don’t show up to enjoy some films together with us, we cannot continue to do what we do.

Oakulture: In terms of this year’s offerings, what are you particularly excited about?

KK: Personally, I am most excited about “Lost Landscapes,” “True Son,” “Out in the Night,” and “Giuseppe Makes a Movie.”

Oakulture: What’s the selection process? If I’m an independent filmmaker, how do I get my film, documentary, or short screened?

KK: OAKUFF takes submissions from January 1 through June 30. Filmmakers are invited to submit on the website under submissions. We are taking all submissions in the form of password protected online screener links next year (a first). Also filmmakers can submit through Film Freeway if they prefer.

Oakulture: Why watch indie films? What do they offer that you can’t get elsewhere?

KK: Cinema is, to quote [author and OAKUFF programmer] Shawn Taylor, the last campfire. And cinema is like bread. It is an essential part of a healthy and full life. It helps us understand ourselves and each other. To remind us of where, who, and what, we have been, are and may become. Cinema is the written word, it is visual arts, it is music sound and light. It is best served fresh and local. And also, there is something sacred about watching movies together as a community.

KK: It is so exciting that the Oakland film culture is widening and deepening. OAKUFF works closely with David Roach and the fantastic Oakland International Film Festival as well as the EBX Scream and Briefs film competitions. We have from the beginning made a point of never adopting a competitive posture towards other festivals for philosophical reasons and because it doesn’t make any sense. The only way Oakland will be recognized as a destination and a home for film culture is if we work together, that simple. Together we are stronger and Oakland wins.

Oakulture: How soon after the end of one year’s festival do you start thinking about the next one?

KK: Ha! Good question. We are usually exhausted but we try to have a meeting soon after the festival and start discussing for the next year in earnest starting in January.

Oakulture: Where do you see OAKUFF being in four years, which will be the tenth anniversary?

KK: It is my hope that OAKUFF continues to grow and thrive. It is essential that we become an organization with a few all-year part time employees. To be honest, if we cannot make that step in the next few years, I am not sure that our model of simply “doing it for the love of cinema and Oakland” is sustainable. I am hoping we can enter into an agreement with a like-minded organization that will take OAKUFF under its wing and share some resources. OAKUFF has built an organic, bottom-up film festival infrastructure and takes pride in quality presentations. I believe there is a film organization out there that would love to prop up OAKUFF as a vehicle for good, while allowing OAKUFF to do what it does best and continue to represent our communities.