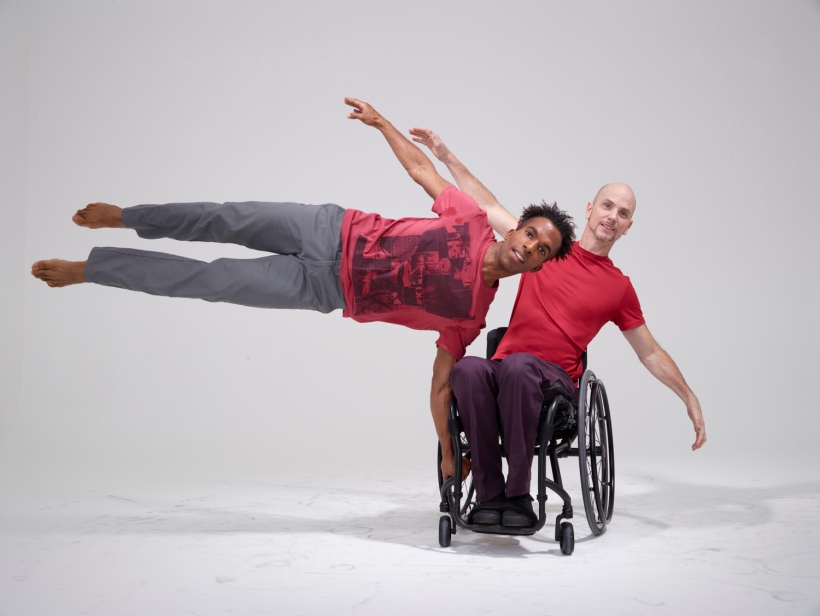 Since its inception back in 1987,Oakland’s AXIS Dance Company has been a pioneer in the field of physically-integrated contemporary dance. Almost 30 years later, the idea of pairing disabled and non-disabled dancers is no less revolutionary than it was when the company started.  Although tremendous strides have been made in terms of legal and civil rights in that time, not to mention societal perceptions, when we think about what a truly-inclusive society would look like, disabled people are often the last marginalized group we consider.

After Judith Smith became wheelchair-bound at the age of 17, her desire to dance turned her into an activist. She co-founded AXIS in 1987, along with Thais Mazur and Bonnie Lewkowicz, and in 1997 became its Artistic Director. In 2000, AXIS scored three Isadora Duncan Awards, signaling that physically-integrated dance was not only a legitimate art form in the dance world – but an innovative, dynamic one at that. Since then, under Smith’s leadership, the company has notched three more Izzies, performed in more than 60 cities, and been the subject of serious critical review in major publications – exceeding previous expectations and raising the bar of what cultural inclusion looks like for the disabled community.

Though they’ve earned their place in the dance world, AXIS performances aren’t just for dance aficionados, however. The strong theater elements make their shows more universal than one might think; in addition to the unique movement dynamic physically-integrated dance brings to the table, there’s a cerebral element present which causes viewers to rethink what it means to be human and how much of human expression is a kind of adaptation. Not to mention an emotional element which can lend an intense sense of poignancy and urgency in how it makes you feel. Based in the Malonga Center in downtown Oakland, AXIS opens up its home season with tonight’s premiere of “Onward,” featuring works by Sonya Delwaide, Joe Goode, Alex Ketley, and Bobbi Jene Smith.

Oakulture recently caught up with Smith during a rehearsal, and she was gracious enough to share her artistic process and wise words of wisdom with us – and you. Check it out: 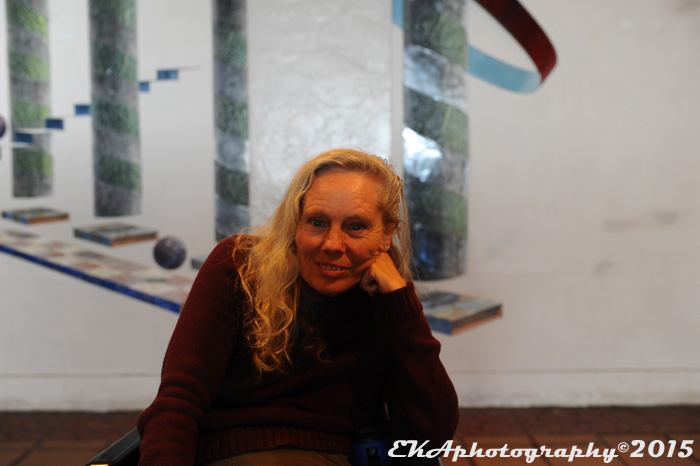 Judith Smith: Probably finding great choreographers and composers to work with is the least-challenging, because there’s so many great people out there. That’s the fun part, looking at other people’s work and trying to figure out how it would match AXIS and our aesthetic with our particular combination of dancers.

Oakulture: You took over as Artistic Director of AXIS in 1997. How have perceptions of the company changed over that time?

Judith Smith: Well, I think the big driver for me was increasing the artistic quality of our work and the professionalism of the company. So I would say that when we started commissioning work from really well-known choreographers and composers, that really changed how people looked at the work. Because when critics would come to review us, it was hard for them to talk about the work. When we started working with other choreographers, they could review us in the context of what they knew about that choreographer’s work. So I think also the fact that our first repertory show, our first home season, in 2000 after I took over, was Bill T. Jones, Joe Goode, Joanna Haigood, Sonya Delwaide, you know, it was a pretty impressive lineup. So, I think it gave us a stamp of validity that we didn’t really have: ‘Oh yeah, these people are really dancing, and they’re really doing dance. And they’re serious about their work. It’s not therapy.’

Oakulture: At the recent Othering and Belonging conference, you spoke about how AXIS wasn’t intended to be political, but you realized that there was an inherent realpolitik in what you’re doing. Can you elaborate on that? Why is it political? And would you consider yourself an activist?

Judith Smith: I am definitely an activist. I am an activist by default in some ways. I didn’t grow up in a politically-active family. I became disabled when I was 17 and that was a long time ago at this point. And we didn’t have the ADA, we didn’t have the 504 and we didn’t have all of these laws that we have today. So, advocating for myself, advocating for my community, had just been something Ive had to learn to do.  We didn’t start AXIS with the intention that we were going to go out and change people’s minds about disability. We really just wanted to dance. But we realized that we still, until recently, rarely saw a disabled person on TV. Or in a music video. Or in an advertisement. And, when we started dancing, it was very very rare to see a disabled person onstage, let alone collaborating with non-disabled people in a way that was equal. There are still theaters in San Francisco that we can’t get into, because they’re up a flight of stairs. We’re 25 years into the ADA. How are people even getting away with that now? They wouldn’t be in a theater where somebody that was gay couldn’t get to, or somebody that was black couldn’t get to, or someone that was Muslim couldn’t come to. So, we’re still systematically discriminated against in terms of our little small community here, our little dance community. And I think we really have done a lot of educating here, with presenters and funders. When we started writing California Arts Council grants, in the demographic breakdown, there wasn’t a box for ‘disabled.’ So I’d make a box and I’d check it and I’d write it in. So now disability is, not always, but often included in the demographics that people are collecting. And it’s, not always, but often included in the list of what multiculturalism is. I think Barack Obama was probably the first president to mention people with disabilities, as part of the multicultural part of his speech. There’s buses we can’t even get on. It’s just part of trying to have a life and be active in the world, I think you have to be an activist if you’re disabled. 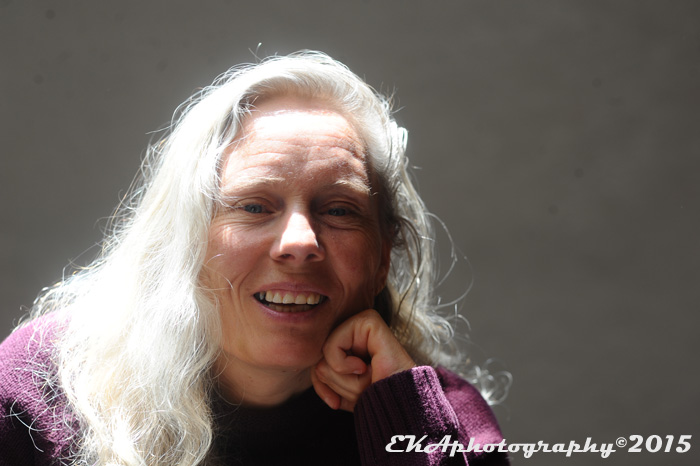 Oakulture: AXIS productions aren’t just dance. They embody aspects of spoken word and theater, and employ both social and personal commentary. For example, Joe Goode’s “To Go Again” is about veterans, and addresses the need for resiliency in the face of life-changing events. Why is it important to you to have these kind of multifaceted productions?

Judith Smith: Well, it became important because I saw Joe Goode’s work and I really liked his work. And he’s a dance theater person, so he does like to use song, and he does like to use text. Our early works were often about disability, very directly. We made a choice to not do things specifically about disability. Our early works were [also] very narrative, so it’s kind of something… we’ve used text from our first piece, that we performed at Calvin Simmons in 1998. In the Dance Brigades dance festival, the Furious Feet Festival for Social Change. So I just feel it’s, being a contemporary dance company, doing dance theater and doing pieces that include text and narrative, it just makes sense. 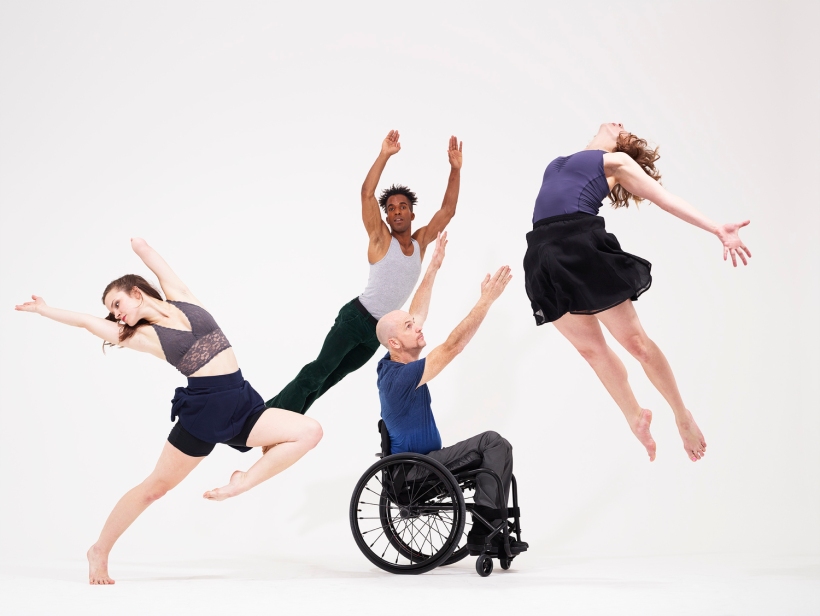 Oakulture: In the description of one of your video clips on Vimeo, it says, “these works were chosen as examples of the movement vocabulary, virtuosity, partnering and theatricality” of AXIS.  What do each of these concepts mean to you?

Judith Smith: Well, movement vocabulary, our vocabulary is obviously very different than most contemporary dance companies, because most contemporary dance companies have dancers that are all moving relatively similarly. We have dancers who use power wheelchairs in this company, we’ve had dancers who use prosthetics, and they’ve danced with and without prosthetics, or they’ve used crutches. So you necessarily expand, and inherently radically expand, the possibilities of movement. And I know that’s what excites me, that’s what excites the dancers, and that’s what excites the choreographers when they’re coming in to work with us. It’s that our movement vocabulary is much more expansive because of the physicalities that we embody. Virtuosity, I love seeing very very virtuosic dance, you know, the dance that is at the level of San Francisco Ballet or Lines or ODC or the non-disabled dancers of AXIS. And disabled dancers’ virtuosity is often very different. It’s one of those things where you cant watch somebody walking across the stage and it can be completely  mesmerizing, because it has to do with their presence, and their intention. Virtuosity for me, its not just physical. And all of our dancers work on whatever their virtuosity is, to keep growing that and improving that. 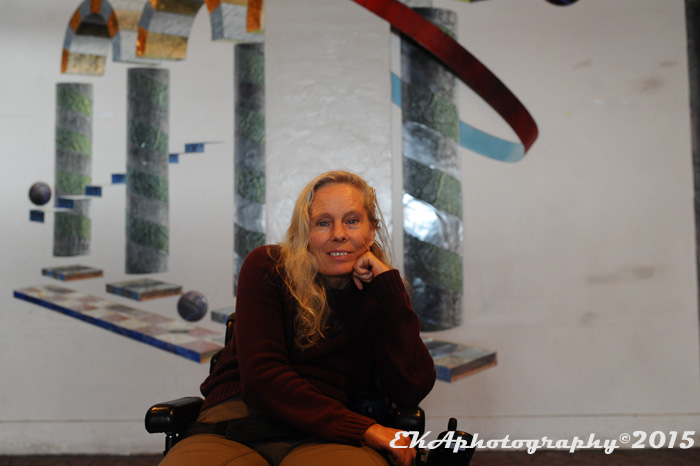 But it’s different for every dancer, I think. Partnering, well, again, because we have so many different ways of moving, the options for partnering and the abilities for partnering are just expansive. It never ceases to amaze me. When we first started working with outside choreographers, it was the way they would see us partnering that was so much fun and so exciting and took us to places we couldn’t see. They’d be like, I’d like to see this and you’re kinda like, ok, well, we’ll try it. The partnering is just so exciting when you’re utilizing the way a wheelchair travels, or the way a crutch handles weight, you know the architecture that a cane or a crutch makes… the partnering options are really expanded. Theatricality kind of speaks for itself. Some dance pieces are much about the movement, about the music, about the timing, whatever. And then some, like Joe’s piece, are theatrical. I think Sonya Delwaide’s work is always very theatrical, even though it’s often abstract, she brings a theatricality into her work.