So, let me get this straight: According to the New York Times, gentrification is going to save Oakland? That’s funny, almost, because that’s not the conversation Oaklanders are having about the Town they live in.

To recap: On October 3, journalism’s Grey Lady showed her true colors in an article ostensibly about the tragic murder of muralist Antonio Ramos, slain by a random act of violence while ironically working on a mural designed to heal trauma and beautify the hood. When we say ‘hood, we’re talking about freeway underpasses in West Oakland, which are typically not the parts of town you would show off to Marin socialites and international jet-setters. 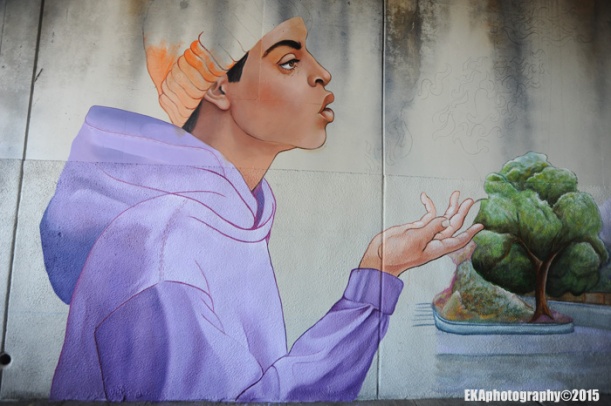 Yet in the Times’ view, the killing of a muralist was a blip on a forward march of foodie guidebook ratings, North Bay one-percenters mingling with pierced and tatted urchins during First Friday, and tech invaders annexing downtown, signaling Oakland’s arrival as – what, exactly? The Times didn’t specify.

What they did say was this: “the death of Antonio Ramos… was a reminder of the stubborn grit and crime that still cling to the city despite the gentrification boom that has fueled its reputation as Brooklyn by the Bay.” (emphasis added.) 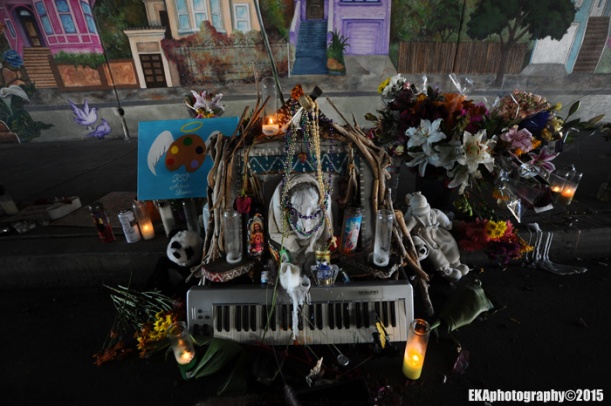 The Times article went on to quote OPD Chief of Police Sean Whent as saying, “people are worried about gentrification because, I think, it does enhance conflict.” Yet, maybe because that point conflicted with the article’s insistence that gentrification is a desired and entirely serendipitous outcome for all, the writer just sort of let that comment hang. She went on to quote Mayor Schaaf, who seemed apologetic that she had to deal with the reality that good people like Ramos are sometimes murdered over nothing. “That’s the life of an Oakland mayor,” she said. 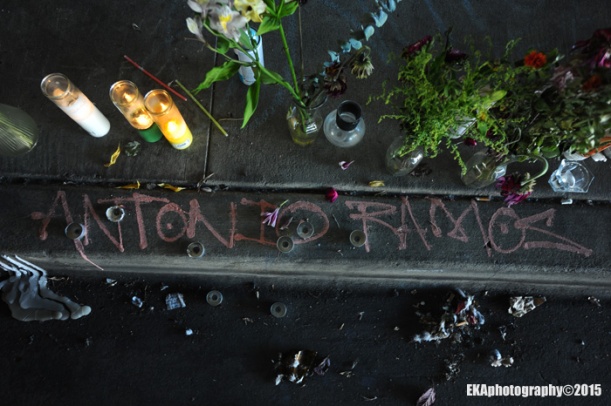 Neither Schaaf nor the Times seemed to be able to grasp the essential dichotomy, that the mural Ramos was working on before he died was not about gentrifying Oakland for newcomers able to afford skyrocketing rents, but about beautifying an area whose primary demographic is black and poor, a woebegone, dark, and foreboding passageway which, prior to the mural, was primarily characterized by homeless people, birdshit, and carbon emissions – for the benefit of current residents.

As muralist Pancho Peskador, who witnessed the shooting, said, “This fucking freeway is pretty shady. It’s dark. It’s ugly.” But in doing the work, he added, “I see the transformation of it. It’s progress for the whole community.”

Ramos’ death, sensationalized by the media, has catalyzed the mural project – the third in a series developed by non-profit Attitudinal Healing Connection. I hesitate to use the word martyr, but there’s been a tremendous outpouring of love for the fallen 27-year old artist, from candles, flowers, and altars which cover almost the entire 200 feet of sidewalk at the mural site, to a tribute piece painted in his honor by his art teacher Eric Norberg, to a renewed dedication to the mural’s mission by the surviving artists. Even before the mural has been completed, the effect is tangible: a once foreboding piece of turf is now a sanctified, hallowed ground. It’s as if Ramos was a blood sacrifice to the gods. That’s a hard price to pay, but one which will hopefully bring more peace and less violence. 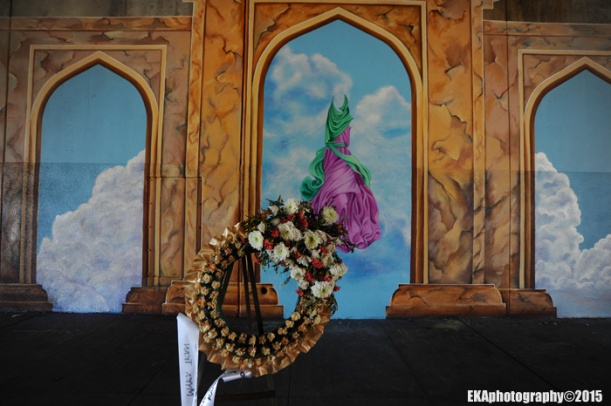 Antonio Ramos didn’t die because Oakland isn’t being gentrified fast enough; he died because systemic  inequity and internalized oppression among people at risk of displacement  — on top of income gap, on top of daily pollution exposure, on top of police misconduct, etc., etc.,  — have degraded respect for life. As Project Director Dave Burke said, “that’s America” – not just Oakland.

Speaking of life, there was plenty of it, in abundance, at this year’s Life Is Living Festival. Although there was some talk of the repercussions of not having a big headliners as in years past, that didn’t matter at all. Essentially, no one cared, because big headliners aren’t what people go to the festival for; the main reason to attend LIL is to be immersed in community and culture.

That was well-evident last Saturday. In the space of just a few hours, Oakulture experienced an African drum and dance circle; an amazing group of young Haitian musicians playing original compositions; an eye-popping demonstration of turf dancing; powerful sangin’ sistahs; equally powerful youthful spoken-word sheroes;  Town Park youths perfecting ollie grinds; and a streetful of people filling up the asphalt of 18th Street, dancing joyously to a baile funk DJ as the sunset glowed with iridescent hues of orange and red.

Earlier, in a conversation with artist Brett Cook, I remarked that LIL seemed to embody the fulfillment of the Black Panthers’ vision of community-oriented social services intermingled with Afrocentric-leaning culture – a vision which began almost 50 years ago, and frequently utilized that same location (DeFremery Park, aka Lil Bobby Hutton Park). There were no overt politics on display, and the ideology being pushed essentially amounted to, celebrate life, the sunshine, and the people. It was a concrete example of what LIL producer Hodari Davis called “black joy in the hour of chaos.” 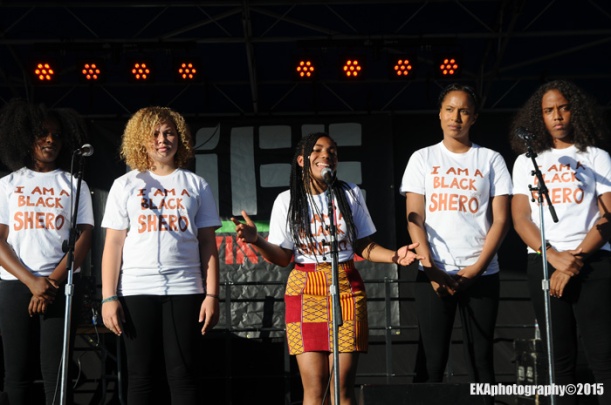 If LIL was a subtle anti-displacement initiative, somewhat less subtle was the Samba Funk-led #SoulOfOakland rally protesting a recent transplant’s attempt to shut down a drum cipher in honor of the Blood Moon, which ended in multiple citations and allegations of racial profiling and false accusations of assault. You may have heard about it; not only has reportage by Davey-D and others gone viral on social media, but Chronicle columnist and perennial Oakland hater Chip Johnson even weighed in, predictably defending OPD while chiding SambaFunk for riding the “racism train. “

To even go there, one has to ignore all the disturbing reports, not just of racial profiling by police, but of noise complaints against black churches, the non-profit-friendly Humanist Hall, and the Malonga Center—home to Oakland’s Afro-Diasporic dance and drum community—as well as the closure of the Burrito Shop on Lakeside and the Rock Paper Scissors collective on Telegraph, and reports that Uber’s relocation to the Sears building will accelerate gentrification even more. 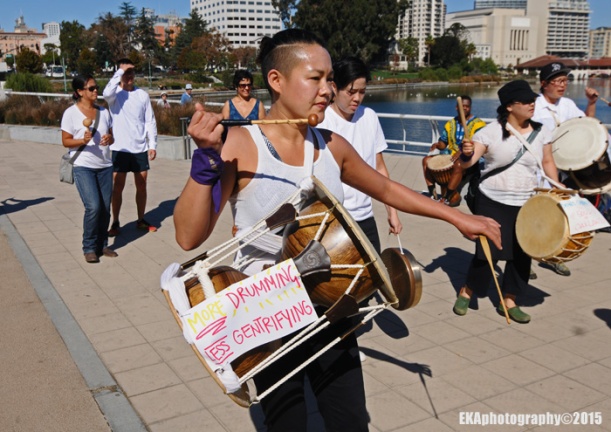 As Oakulture previously noted, Oakland’s recent percent for art ordinance was hit with a lawsuit by developers before it could commission even one work, and a proposal for an arts-friendly project on the Henry J. Kaiser Auditorium site was rejected by the City Council. Since then, more ominous news on the development front has come from the announcement of the Downtown Oakland Specific Plan and a SPUR report on the area — which specifically mentioned art in just one of 30 recommendations.

All of these are signs of the times, and if you connect the dots, it’s clear that what mainstream media calls a “gentrification boom” clearly means displacement for the have-nots.

But Samba Funk isn’t having that. Not without a fight. And by fight, they mean, drums, lots of them. And dancers. The rally at the lake followed a successful action on the steps of Frank Ogawa plaza, within earshot of City Hall, which was followed dutifully by a TV news crew. Samba Funk Artistic Director Theo Williams later spoke up at the City Council meeting; the vibrant drumming from outside the building was clearly audible as he testified about the original incident.

It was a bit cute, light-hearted even, to see signs on people’s backs announcing “More Drumming, Less Gentrifying.” But there were serious undertones to the entire event. Cultural resilience is embedded into every beat of ethnic drums, and to experience a world-class exhibition of cultural diversity which was so much more than a drum circle – really, it was an anti-displacement ritual, and all that embodies – had a resonant impact. To hear tales of the Haitian defeat of Napoleon along with stories of the Ohlone village of Huichin gave a certain perspective which put gentrification, displacement, and cultural resistance in a historical context. 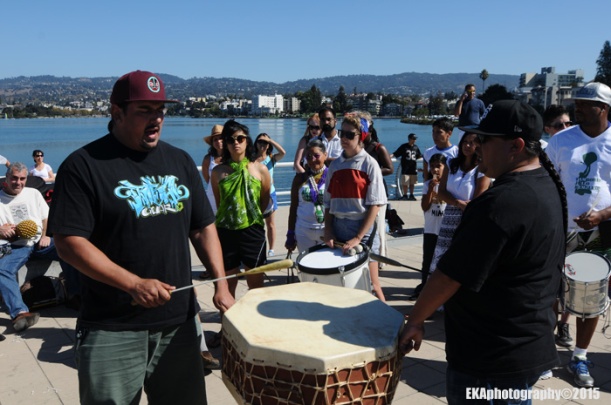 Councilmembers Desley Brooks and Abel Guillen professed support for the cause, but microphone pontification was kept at a bare minimum, and; instead of long-winded speeches, the focus was on building and engaging community through drumming and dancing.

According to Lieras, “Drums and voices were the first instruments. Some of you who have been drumming for a long time understand the healing powers these drums possess. We believe inside these drums, there’s spirits… when we use this drum, it has ceremonial healing practices and purposes.”

As an Ieumsae spokesperson said, “Drumming is an act of resistance. What happened last week with SambaFunk is not ok, it’s a problem. It’s gentrifying the soul of Oakland, so we’re here in solidarity.”

“We’re gonna be drumming here on a regular basis,” said Williams, adding that he was renaming the amphitheater “freedom center.” Every time we’re here, he said, “we’re gonna exercise our freedom.”

“This is what makes Oakland great. It’s our culture and our arts,” said Guillen, who reaffirmed his intention to reinstate the city’s now-defunct Cultural Arts Commission.

By the end of the day, nearly all of the audience had joined the dance section; off to the side, the percussion contingent, most wearing white, supplied the music as the dancers supplied the movement. If Williams had wanted to emphasize that cultural diversity and rhythmic expression are indeed the soul of Oakland, he succeeded. This was a mini ethnic dance and drumming festival, in a public space, which engaged community in interactive, inclusive activities and championed an inspired cause. All one needed to participate were a percussion instrument and/or your two feet.

Dancers at the SoulOfOakland rally at the lake