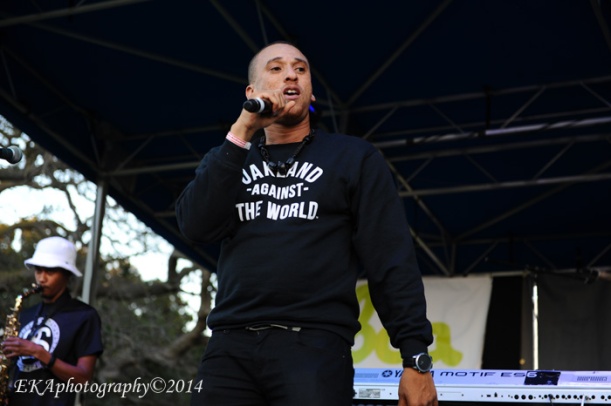 2014 started out with a bang, with the release of Kev Choice’s Oakland Riviera album last January. The album, released independently through Choice’s own label, received little national attention. But it was easily one of the best releases of the year in any genre, and one which not only proved that Choice’s progression from sideman to bandleader was complete, but also galvanized Oakland’s urban music scene in the direction of conscious messages and aesthetic quality. Oakland Riviera established a local benchmark for virtuosity and musical intersectionality, as Choice fluidly alchemized hip-hop, R&B, soul, and jazz grooves with a hint of electronic finesse, in the process showcasing not only his own prowess as an emcee/producer/arranger/maestro, but also the considerable talents of a long list of local collaborators, which included Jennifer Johns, Lalin St. Juste, Erk Da Jerk, Viveca Hawkins, Mr. FAB, Phesto Dee, Zumbi Zoom, Howard Wiley, Marcus Shelby and many more. Yet for all the album’s collaborative nature, it was Choice’s solo material which heralded the most praise, from the moody and melodic urban instrumentals named after Oakland streets (“Int’l Blvd,” “MacArthur’s Mood,” “Foothill Dip”) to the uber-socially-conscious, Gil Scott Heron-esque “Crazy Illusions,” which closed the album.

The album’s title, Choice said in an interview, isn’t an actual place, but rather a reflection of his life experiences: “There’s no specific place called Oakland Riviera, but it kind of grew as a concept in my mind and I started thinking how could I express that. With me being a musician from Oakland and traveling around the world and also, me being an emcee and being a pianist and a composer, it’s almost like bringing different elements together to make one world.”

Choice proved to be a ubiquitous presence throughout the year, dominating the live music scene and even weighing in from social media-land on town business and international runnings while touring Europe with The Coup. Some other Oakland music artists who built up strong momentum this year include Jahi, the veteran conscious hip-hopper who is now a part of the Public Enemy family and its next-generation outfit PE2.0, and The Seshen, the retro-futuristic band headed by St. Juste, who signed to the Tru Thoughts label and won Best In Show at the Oakland Indie Mayhem Awards on the strength of their trip-hoppy single “Unravel.” 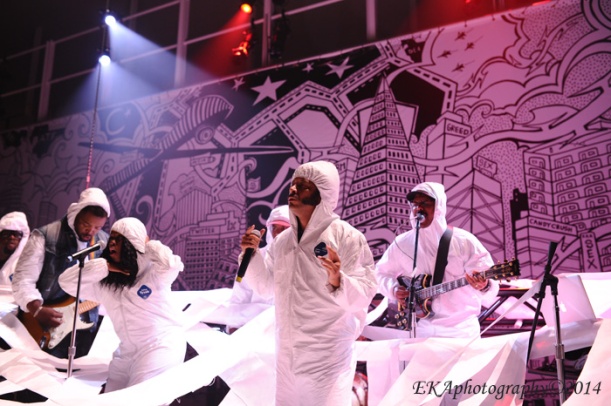 Speaking of The Coup, not only did they firm up their international credentials, touring France, Germany, Italy, and England, but their frontman Boots Riley also proved fairly ubiquitous, expanding his artistic repertoire with “The Coup’s Shadowbox”—a  performance art piece at the Yerba Buena Center For the Arts featuring installations by Jon-Paul Bail, surprise guest performers, and dancing puppets—and “Sorry to Bother You”—a darkly ironic, infinitely humorous screenplay published in McSweeney’s Quarterly, a segment of which was performed during SF’s Litquake festival. 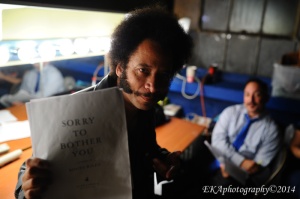 Boots Riley holds up a copy of his screenplay

February saw the 51Oakland folks team with the Elevate Foundation and the tsarina of the timbales, Sheila E., for the “Elevate Oakland” all-star benefit at the Fox Theater – one of the few shows at the renovated, iconic venue to prominently feature local artists.

The concert, a benefit for music programs in Oakland schools, emphasized the community-oriented nature of the city’s musician contingent, which sometimes seems to be more weighted toward social awareness and activism than outright commerciality. Not saying that’s a bad thing, but it is a thing you’ll find here. 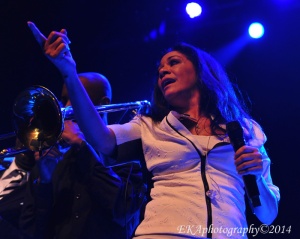 In addition to Ms. E—fabulous as always—featured artists included Choice (who took the stage with a group of young musicians he’d been mentoring, the Future Shock Quartet), Goapele, Michael Franti, and the Castlemont Choir. 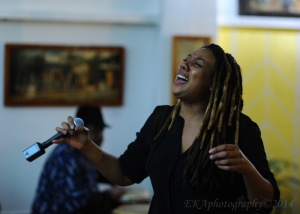 The intersection of tech and culture—played out against a backdrop of encroaching gentrification, reports of displacement, and the influx of silicon-coated dollars into the city’s coffers as well as the dubious new “techbro” demographic—was a definite undercurrent of Oakland in 2014. Two new co-working spaces, Oakstop and Impact Hub, opened within a half-mile of each other and immediately established themselves as Uptown destinations; both went out of their way to emphasize arts  and culture as part of their mission, hosting book release parties by painter James Gayles and vegan soul food chef Bryant Terry, as well as various film screenings, panel discussions, and live performances. 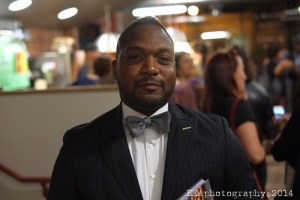 After taking a month off, First Fridays returned in style in March. While the monthly street party may have jumped the shark in late 2012, when it topped out at 15,000 attendees, it remains an important part of the city’s cultural arts fabric. 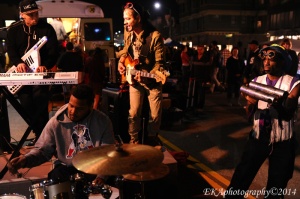 While many locals may be over First Fridays as a must-be-at happening, the Uptown street crawl is still an important draw for non-residents, and the distillation of all that energy has resulted in more micro-scenes and curation/activation of venues both on and off the Telegraph/Broadway strip. In short, we’re seeing more events, more parties, and more action around FF, which helps to further the notion of Oakland as an arts-friendly town that is starting to overtake San Francisco as a cultural incubator, if it hasn’t already.

One example of a socially-aware happening you probably wouldn’t have seen in SF was the Betti Ono Gallery’s “Stop Telling Women to Smile” exhibition, which combined performance and visual art, documentary and social commentary to address the issue of catcalling. 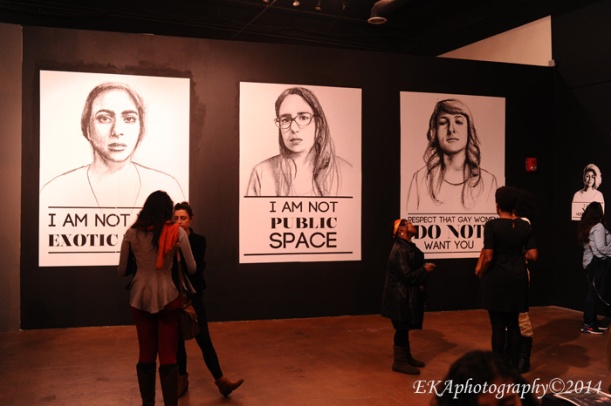 As Oakulture wrote at the time, “Envisioned by Tatyana Fazlalizadeh, “STWTS” includes both gallery exhibitions and a street art campaign… Fazlalizadeh’s striking large drawings of local women with captions imparting their responses to unwanted attention.” The campaign not only garnered international recognition, but made the front page of the culture section of the New York Times; the fact that Fazlalizadeh debuted the work at an Oakland gallery speaks to the city’s growing cultural gravitas. 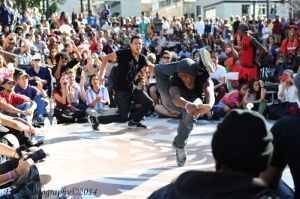 Fast-forwarding to this past August, we saw the first-ever exhibition of turf dancing—the Oakland-originated dance craze which has gone international, thanks to the efforts of the supremely talented Turf Feinz—at the Art & Soul Festival. It’s always interesting to see how an underground-born art form does when exposed to a wider audience, and turf dancing came through with shining colors. 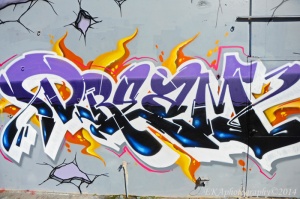 Street art was also huge in 2014. Significant public murals were painted around town by the Attitudinal Health Collective, Community Rejuvenation Project, Vogue TDK, and a collaborative effort in solidarity with Palestine which included Spie, Deadeyes and Emory Douglas.

Dream Day, the annual event celebrating the legacy of Mike “Dream” Francisco, brought out several generations of graffiti artists and their friends and families to a West Oakland location which was then blessed with on-the-spot pieces, as well as live performances from rappers Richie Rich and Equipto. One of the defining characteristics of Oakland’s urban art scene is the crossover between street and gallery mediums, and the intersectionality between art and activism – which revealed itself at galleries like Warehouse 416, Betti Ono, Oakstop, SoMar, and SoleSpace. If you weren’t being exposed to mind-blowing art, much of it aerosol-oriented, this year, chances are you didn’t get out much. 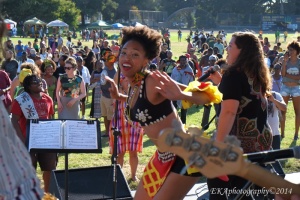 Speaking of getting out, 2014 was a great year to be out and about in Oakland, thanks in large part to the many festivals around town which built community, offered peeks into cultural windows, and otherwise allowed large crowds to get their groove on simultaneously. In addition to old favorites like Art & Soul, Life Is Living, and the Malcolm X Jazz Arts Festival, relative newcomers like the Ethiopian culture celebration Home Away From Home and the Umoja Festival spotlighted diversity and Pan-African unity, while the Oakland Music Festival transformed the downtown into a large concert venue, complete with massive stage. We can’t forget the Oakland Indie Awards, either, held at the beautiful Kaiser Rooftop Gardens, which again featured an impressive promenade and performance by the SambaFunk Funkquarians, in full carnival attire. 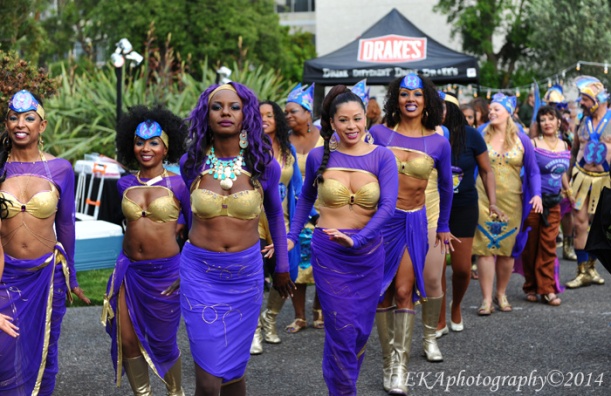 Funkquarians at the Oakland Indie Awards 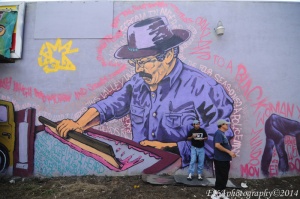 It was also nice to see East Side Arts Alliance’s first-ever block party in the San Antonio district, one of the most culturally-diverse neighborhoods in the entire country.

Live performances were part of the fuel which kept Oakland percolating in 2014. Some of the memorable ones Oakulture witnessed in 2014 included:  Queendom, an all-female hip-hop throwdown which established an alternative narrative to hoodrat hip-hop and rachet rap; the Town Futurist Sessions, a progressive, Afrofuturist space where creativity and experimentality freely mingled; Bang Data’s en fuego record release party at SF’s Independent; Jose James’ wonderfully sinuous rendition of Al Green’s “Simply Beautiful” at the New Parish; and the Funky Meters’ ear-pleasing extended jam session, also at the New Parish. 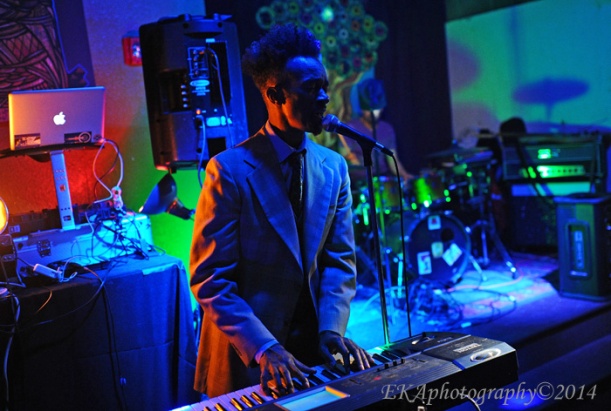 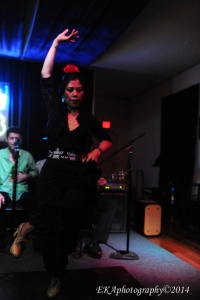 Quite possibly the best live performance Oakulture saw in 2014, though, also took place at YBCA, whose “Clas/Sick Hip Hop: 1993 Edition” revisited the much-storied Golden Era of hip-hop with a mostly Oakland-based group of emcees performing classic by 2Pac, Souls of Mischief, Saafir, Black Moon, Queen Latifah, and others. 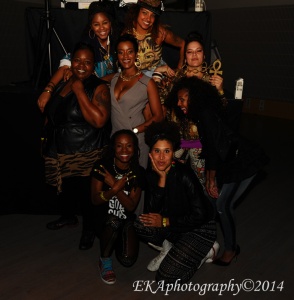 U.N.I.T.Y.: the women of Oakland hip-hop

Choice, unsurprisingly, was all up in the mix as bandleader, arranger, and occasional rapper, and the emotional crescendo was a mindblowing rendition of the female empowerment anthem “U.N.I.T.Y.,” featuring Zakiya Harris, Aima the Dreamer, Ryan Nicole, Viveca Hawkins, and Coco Peila. As Oakulture wrote at the time,  the performance “evoked a sea of epiphanies, none greater than the notion that Harris and Co. had tapped into hip-hop’s elemental womb and stuck a chord of long-overdue gender balance, releasing a flood of amniotic lyrical fluid which coated the audience’s ears with sticky bliss. Hip-hop may be a mostly male-dominated art form, but in keeping with YBCA’s Left Coast ideology, the Bay Area’s female emcees reigned like queens.” 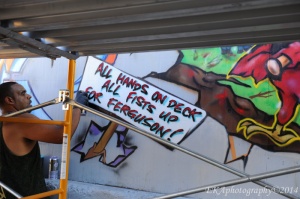 There was a lot of positivity within Oakland’s cultural arts community, but everything wasn’t all good nationally. Simmering tensions over race, injustice, and the ongoing deaths of young black males at the hands of the police boiled over in 2014, resulting in coast to coast protests and the beginning of a long-overdue conversation which threatened to overshadow every other topic worth discussing. The national reverberations of the Mike Brown and Eric Garner incidents resonated strongly with a community which had already been in activist mode, ever since the death of Oscar Grant on New Year’s Day 2009, and which had also taken last year’s Trayvon Martin situation to heart. 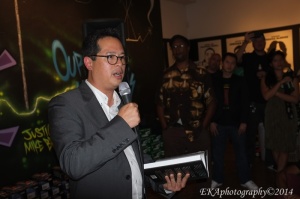 So when the Ferguson decision came down, Oakland’s artivists were ready. Oree Original, Favianna Rodriguez, Refa One, the Dignidad Rebelde collective, and the Trust Your Struggle collective were among those who helped spread the #Blacklivesmatter meme through political art. During the protests, the Solespace Gallery held down much-needed space in what seemed like the eye of the hurricane for a moment, offering a safe place for art and community gathering, and refusing to board up its windows. It also hosted a book release party for Jeff Chang, the Berkeley-based author of “Who We Be” – a timely, ultra-relevant look at the intersectionality between the politics of race and the cultural debate over multiculturalism. 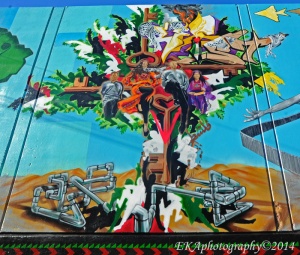 Where national politics are concerned, Oakland represents a bit of a bubble – it’s both more diverse and more progressive than most of the rest of the country, and that progressive diversity informs its culture in many ways, both overt and subtle. The creative arts, it seems, are never too far from what’s happening on the streets, the blocks, and the boulevards. Count Oakulture as among those who wouldn’t have it any other way.