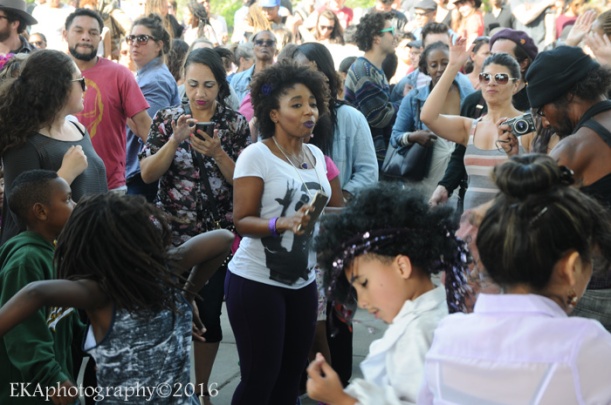 A current Oakland Museum of California exhibit, “Oakland, I Want You to Know,” comes off very much as a love letter to The Town. But it’s a weird kind of  love letter, one filled with reminiscence for a paramour you dumped because they weren’t rich enough. The exhibit, which runs until Oct. 30, wants to evoke feel-good memories of a blue-collar city which is unfortunately disappearing right before our eyes – replaced by metrosexual techbros, designer ramen, specialty cocktails, high-rise condos, and spiraling rents. It also wants to weigh in on the ongoing conversation about gentrification. But it does so in a way which is both sanitized and awkward.

There’s a recreation of the famed sign from Esther’s Orbit Room, the last holdout of the legendary  7th St. strip in West Oakland – a jumping-off spot for blues, jazz, and R&B, once known as the “Harlem of the West.” But the replica doesn’t replicate the energy or grit of that infamous watering hole. It seems out of place in the brightly-lit OMCA exhibition room.  One archival photo taken outside the venue featuring local music-scene luminaries, hints at the Orbit Room’s significance as a cultural institution of Black Oakland, but can’t make up for the loss of the venue, much less the erasure of the once-thriving strip itself. Over the last decade, West Oakland, though still predominantly-African-American, has absorbed an influx of tens of thousands of urban professionals, creating an uneasy juxtaposition of income disparity and cultural disassociation between new and old residents.

In another section of the exhibit, the West Oakland BART station is feted. It’s a strange choice, since the station—just 12 minutes from downtown San Francisco, through the Transbay Tube—is itself a symbol of displacement; its construction caused the forced relocation of thousands of mostly African American residents by the time it opened, in 1974. That fact is briefly noted, as is the station’s current attraction to commuters. Also among the artifacts depicting “Oakland flavor” are two recent posters advocating for affordable housing and tenants’ rights. The allusion to community activism, however, feels more like lip service than actual solidarity with Oakland’s liberation struggles. There’s little of the vibrancy which has fused social justice and cultural expression in Oakland for decades – a vibrancy which is very much a part of the current resistance to displacement and the encroachment of gentrifiers. It’s also telling that a photo collage of an Oakland neighborhood – easily the most poignant piece in the entire exhibition – honors the past, not the present. An OMCA staffer told Oakulture that the photographer no longer lives in the neighborhood; doubtless, many of the residents depicted have moved away as well. And despite the homages to local mainstays like Town Park , Youth Radio, and City Slicker Farms , seemingly thrown together at random, “Oakland, I Want You to Know” feels like it’s intended more for tourists, visitors, and new arrivals than for longtime residents.

There’s an attempt at cultural continuity with a wall celebrating classic Oakland artists’ album covers juxtaposed with an audio-visual presentation of retro-futuristic bluesman Fantastic Negrito. But it too misses the mark. An LP by Oakland blues singer Faye Carole is a welcome sight. But Negrito’s connection to the tradition of an earlier era isn’t satisfactorily explained, and the neon logo (borrowed from his studio/gallery, Blackball Universe) looks like a promotional display you might have seen at Tower Records in the 80s or 90s, complete with a looped audio stream of songs from his new album, The Last Days of Oakland. It’s oddly commercial for a museum piece; if the point was to infer that Oakland is still producing great artists, that point could have been made much more pointedly.

“Oakland, I Want You to Know” might be Town-centric, but ultimately fails for its inability to effectively translate the immediacy of street-level movements into an institutional space. Revolution is never quite that simplified, and though OMCA tried, their Oakland love letter dilutes the heartbreak of displacement and doesn’t present a cohesive narrative. It feels thrown together in places it should be fluid, and errs by attempting to placate both the gentrifiers and those fighting against them.

Thankfully, like a growing number of local artists, Fantastic Negrito can solidly be placed in the latter category. The Last Days of Oakland is fire, but not just because Negrito has the whole blues revivalist schtick down to the cufflinks on his thrift-store blazer. It’s a hot album because the singer-songwriter extracts the essence of blues and African American rock & roll from its dark, skeletal roots, but also because he injects that paradigm with a timely relevancy, much of it inspired by Oakland’s changing landscape and demographic. Another inspirational touchstone is the new push for civil rights, social justice, and police accountability echoing across the country through the #BlackLivesMatter movement. In a new, as-yet-unreleased, video which plays like a short film, Negrito updates the Leadbelly classic “In the Pines” by flipping the lyrics to address black mothers whose children are being killed by cops. Elsewhere on the album, there are skits about the changes Oakland is experiencing, a through-line which also works its way into “Working Poor,” wherein Negrito sings about gentrifiers who step over bodies to “sip fancy coffee.” While many of the classic, pre-civil rights era, blues tunes signified cryptically about social inequality, here Negrito articulates exactly what he means.

Him clean my city

Me sell my soul

The song goes on to address displacement directly (he moved to Stockton, one lyric casually reveals) while maintaining its retro-roots aesthetic. Social commentary, along with autobiographical testimonials, run through most of the songs on The Last Days of Oakland. Many of Negrito’s laments are about struggling against seemingly-invisible barriers to equity; I been knocking on the door since ’94, but they still won’t let me in, he declares on “Humpin’ Through the Winter.” On “The Worst,” he castigates those watching all the suffering, hiding on a hill. But like all good blues albums, there are also heavy doses of dubious temptation (“Scary Woman”) and self-loathing (“Rant Rushmore”) – which occasionally transform into conscious enlightenment (“Nigga Song”). What makes the entire album so current, though, is its framing around Oakland – which codifies it as a historical document, just as Bobby Seale’s “Seize the Time” stands as a testament to the Panther era. 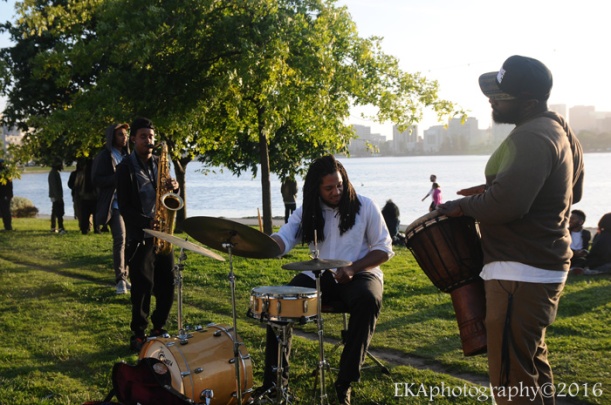 Negrito’s album could be a soundtrack for music-minded social justice activists – visible this summer in everything from festivals at the Lake Merritt Amphitheater and San Antonio Park to musical protests against anti-drumming NIMBYS to dance-happy Prince tributes – but he’s not the only local artist making socially-conscious music. On his last two albums, Oakland Riviera and Love and Revolution, pianist-composer-emcee Kev Choice offered a highly musical alternative to mind-numbing “mumble rap.” 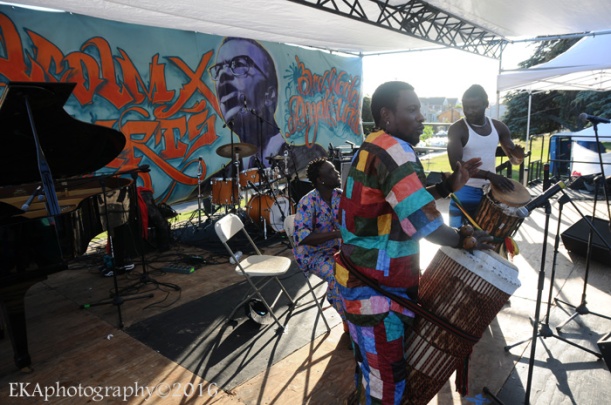 On his latest release, 88 Steps to Eternity, Choice delivers an all-instrumental album which gives a name to the struggle: “Dance of the Displaced.” The track recalls late 70s/early 80s jazz fusion, giving credence to Choice’s credo of “real music that will last forever,” with flurry upon flurry of piano and keyboard runs, alternating forward-pushing tempos with somewhat-melancholy moods. 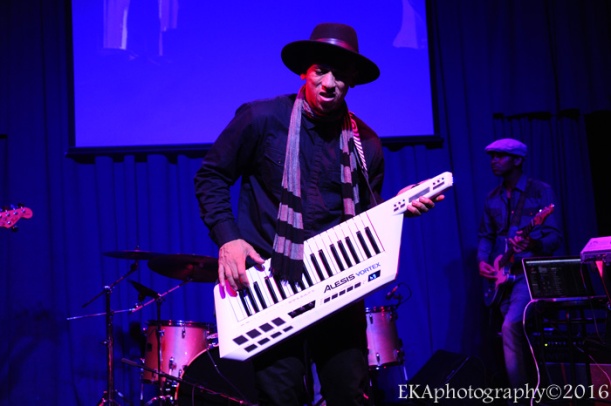 Which seems appropriate. Because nobody, except maybe developers, is too happy about all the displacement going on in Oakland these days. There’s a bit of a contradiction as well, in some of the rhetorical language being put forth by elected officials and some of the actions of city staff. A recent SF Business Times article  on the departure of Planning Dept. head Rachel Flynn confirms she was one of the prime movers behind the acceleration of development in Oakland, which may have come without a full realization of the consequences for the existing population. Mayor Schaaf has convened an Affordable Housing Task Force and City Council President Lynnette McElhaney has officially designated the 14th St. corridor a black arts district. Yet artists and families are getting pushed out of Oakland as the Planning Commission fast-tracks project after project, while neglecting to fight harder for community benefits and affordable housing units. 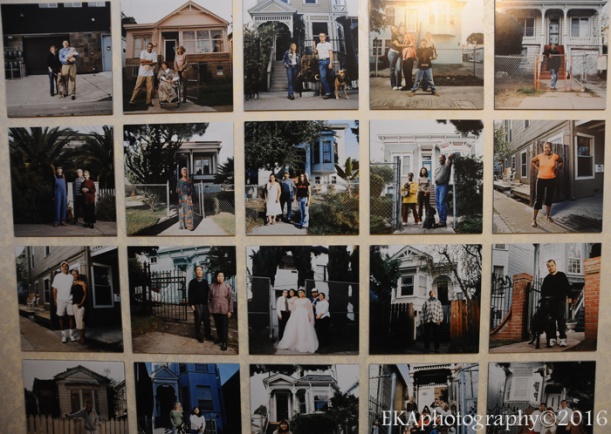 A pre-displacement Oakland neighborhood at OMCA.

How that plays out in the community is one of the salient points of “Alice Street Short,” a rough cut preview of the upcoming documentary “Alice Street”  which recently screened at the All Oakland Mini Film Festival. (full disclosure: Oakulture Editorial Director Eric Arnold assisted with research for the documentary.) The short features insightful interviews with members of the Afro-Diasporic community centered around the Malonga Casquelourd Center, as well as cultural practitioners and historians associated with the Hotel Oakland, a sanctuary of sorts for the Chinese and Chinese-American community. If you missed the screening, a slightly different cut will screen October 13 during the Matatu Festival of Stories, along with a panel discussion moderated by Arnold, a dance performance, and audience Q&A. The idea is to continue the conversation around displacement, gentrification, and cultural resistance, and to engage Oakland residents further in what could be the defining issue of this time in the Town’s history. Will the dance of the displaced turn into a funeral dirge or a victory march? That part is still to be decided.