Reportedly, some 175 local musicians were involved in UnderCover Presents’ production of “Sly & the Family Stone’s Stand,” a tribute to the Bay Area band’s classic album, released in 1969. Seemingly all of them were on the Fox Theater’s spacious stage simultaneously during Saturday night’s encore of “Thank You Fallettin Me Be Mice Elf Agin.” Having already tacked all nine proper songs on the Stand album, not to mention sneaking in snippets of other Family Stone hits, it seemed only natural to end what had been a monumental undertaking with yet another of Sly’s eternal  classics.

The wide expanse of humanity onstage resembled nothing so much as the personification of “Everyday People,” Stand’s biggest hit, and one which had been performed earlier in the evening by rock & roll act Tumbleweed Wanderers. From left to right, the stage was awash in colorful, vibrant folks of several ethnicities singing, dancing, and playing instruments together – MLK’s dream rendered in stage lights for all to see. At the time of its release, “Everyday People” was a manifesto of social acceptance, an urging for “different strokes for different folks.” Despite our cultural, political, and ideological differences, Stone pleaded, “We got to live together.” The statement remains as true now as it was then. 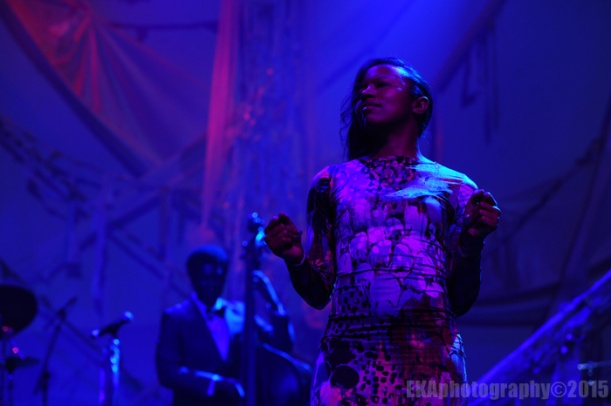 More triumphant celebration than nostalgic remembrance, “Sly & the Family Stone’s Stand” at once upheld and advanced Stone’s musical vision. Groundbreaking at the time, there was nothing on the musical landscape quite like Stand, an album which infused the revolutionary activism of the late 60s into a wide-reaching blend of progressive musical influences, mixing R&B, soul, funk, psychedelic rock, and pop in a way even Motown had yet to imagine – it would be years before Stevie Wonder and Marvin Gaye incorporated social consciousness into their music. Saturday’s show added jazz, orchestral strings, vocal choirs, salsa, and hip-hop to an already-bubbling musical melting pot. The result was pure alchemy. 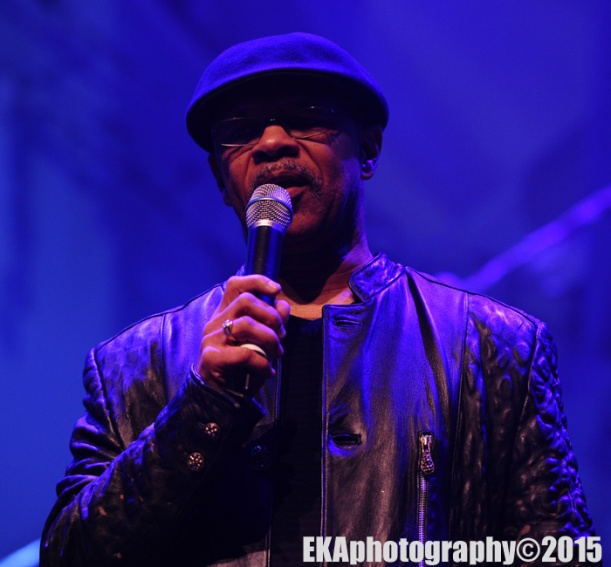 Unfortunately, Oakulture arrived one-third of the way in, after the Awesome Orchestra Collective, Ensemble Mik Nawooj, and Zakiya Harris featuring Elephantine had already warmed up the large-capacity venue with “Stand,” “Don’t Call Me N*gger, Whitey,” and “I Want to Take You Higher,” respectively. 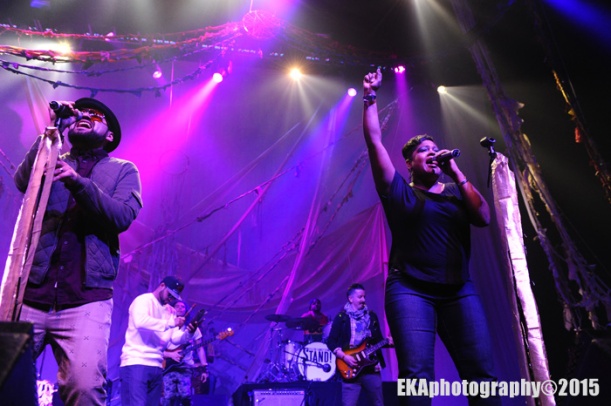 The vibe was indeed elevated as we made our way through the art deco doors into the auditorium hall.  Fortunately, the Marcus Shelby Quintet didn’t let the energy dip. Their take on “Somebody’s Watching You” gave the song an entirely different musical context while reaffirming the power of the lyrics (which are ostensibly about the conscious mind, but could just as easily be about the surveillance state). The MSQ wrapped the song in resonant jazz chordings which allowed the melodies space to breathe freely, highlighted by some impressive vocal work by Tiffany Austin. Bayonics’ version of “Sing a Simple Song” expanded the tune’s territory into funky salsa grooves, overlaid with rap verses, and the aforementioned Tumbleweed Wanderers offered a slightly folksy version of the ubiquitous “Everyday People.” 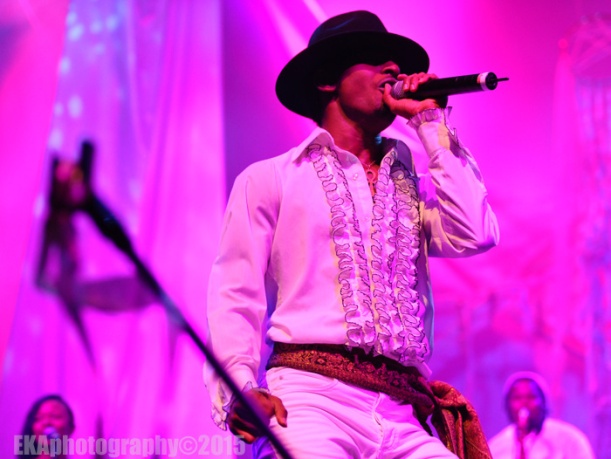 Earlier, many former members of the Family Stone, including bassist Rustee Allen, saxophonist Jerry Martini, trumpeter Cynthia Robinson, drummer Greg Errico, and guitarist Freddie Stone, were introduced, to wide applause. But something was missing: Sly himself, who reportedly appeared on a panel at an afternoon convention held in the Fox’s Den bar. A press release hinted that he might take the stage, but that never happened.

All was not lost, however, as Con Brio frontman Ziek McCarter’s serpentine-like dance moves and channeling of kundalini energy put the sex in “A Sex Supreme,” a reimagining of Stand’s lengthiest number, “Sex Machine.”

Bassist Allen, who replaced Larry Graham in the Family Stone, joined Will Magid & Everyday People for “My Brain (Zig-Zag)”—an instrumental recorded around the same time as Stand which appeared on 20007’s reissue version of the album—which segued into “If You Want Me to Stay” (from 1973’s Fresh, which featured Allen on bass). The Jazz Mafia & Crossroads Collective closed out the set with “You Can Make It If You Try,” another of Stone’s message-laden tracks, which mixed horns and strings with vocals from Trance Thompson, Nataly Michelle Wright and Tym Brown.

All of which led up to the all-hands-on-deck encore, which riffed on what  for many is the quintessential Stone song (just as Stand is probably his best album track-for-track), and one evidently  infused with deep personal meaning: We don’t know exactly who Sly is thanking for letting him be himself again, but the appreciation seems soul-deep and heartfelt. Speaking of heartfelt, the work that went into coordinating the show (an earlier incarnation of which played at the Independent in 2013) had to be considerable, yet the product of all that work was undoubtedly a labor of love. 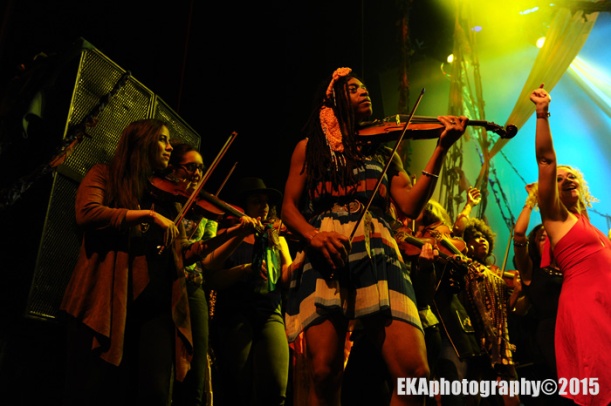 This was easily the biggest splash yet by UnderCover Presents, which has been assembling local bands for remakes of songs from classic albums since 2011, so it wasn’t surprising to see Executive Director Lyz Luke dancing with overflowing joy during the encore. Props also go out to co-producer Yosh! Haraguchi and music director David Moschler, as well as emcee Ricky Vincent, author of “Funk” and “Party Music,” who dressed for the occasion in a multihued tuxedo jacket, topped with an Afro wig and John Lennon shades.

Look for an upcoming airing of the performance on KQED (who videotaped the proceedings), as well as CDs and digital downloads of the live show. And mark your calendar for the next installment of UnderCover (at  the Independent April 3-5), which tackles Bob Marley’s Exodus. Performers reportedly include Boots Riley, Black Nature Band, Rupa & the April Fishes, Sean Hayes, Almas Frontierizas, the Broun Fellinis, T Sisters, Quartet San Francisco and more. That’s a great lineup which should build on all the momentum—and positive energy—generated by the Sly tribute.

Thank You Falettin Me Be Mice Elf Agin

Lastly, Oakulture would just like to note how great it is to have the doors of the Fox open, finally, to local musicians—even if just for one night. It always seemed a little unfair to have this beautiful, restored venue right in the middle of the downtown do major shows which rarely offered local folks opportunities  to perform on that big stage, in front of big crowds. Here’s hoping that “Sly & the Family Stone’s Stand” not only broke that mold, but sets a new, welcoming, trend for the future. 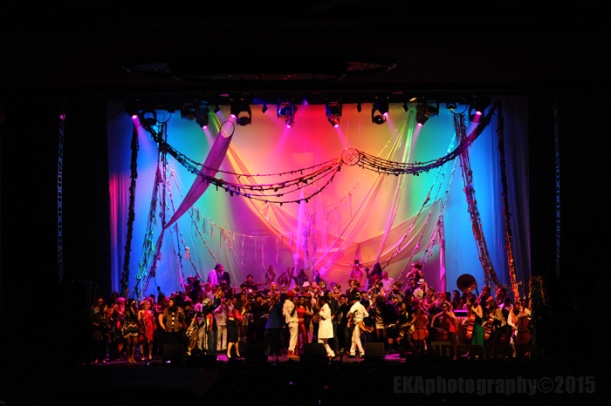