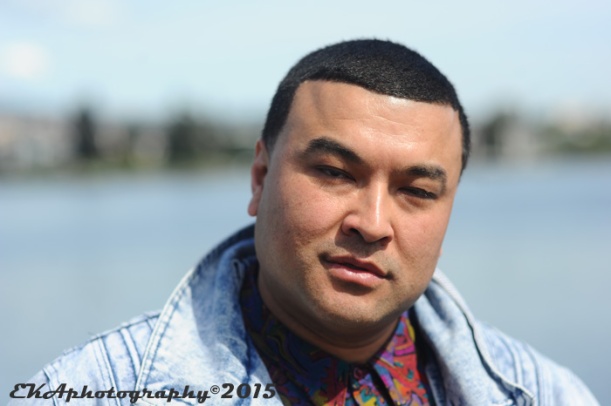 There’s a very short list of Bay Area hip-hop artists active in the mythologized year of 1993 who are still releasing quality new material in 2015. 1993’s “Send Them” – the first appearance on wax of the dude y’all know as Lyrics Born (then named Asia Born) is a long way from 2015’s “Rock Rock Away,” from LB’s fresh-off-the-presses album, Real People.

It’s mind-blowing, in fact, to realize both songs were made by the same artist, although upon close inspection, one can hear traces of what LB has evolved into in his 20+plus year career on his very first recording: never lacking for confidence or at a loss for words, on “Send Them,” LB displays a fast delivery over a DJ Shadow beat built around a looped sample.  But “Rock Rock Away” shows a polished, veteran rapper who has matured into his voice and become comfortable with both live musicians and a more conventional song structure.

Real People represents the latest evolution of LB, a pioneer of what has been termed alternative hip-hop, and an artist who has continually rebooted his musical persona with every release. Like a gemstone with many facets, LB has never been content to make the same album twice. A core member of the Solesides/Quannum collective, he’s explored the outer regions of experimental hip-hop as a member of the duo Latyrx, contributed to albums by labelmates Blackalicious, and released an impressive catalog of solo records which have delved into influences ranging from the neo-funk of his 2003 breakthrough album Later That Day, to old-school R&B/soul leanings of 2008’s Everywhere at Once and the electro-boogie bounce of 2010’s As U Were.

On his new album, he drew inspiration from the musical culture of New Orleans, where he recorded with old friends Galactic. That would seem like a huge stylistic leap for almost any other emcee, but for LB, it makes perfect sense. We wouldn’t think twice about an R&B, rock, or country artist soaking up NoLa flavor, but the idea of a Bay Area rapper doing it seems cringe-worthy, until we remember that a) LB was one of the first emcees in the region to work with live musicians; and b) N’Awlins is the source of many of the musical forms he has invoked over the years.

Recently, LB sat down with Oakulture’s Eric Arnold for what ended up being a long-ass interview. So long, in fact, that it must be presented in two parts. In the initial segment, LB—who plays May 15 at the Independent; tickets are here—discusses his opinions on the hip-hop artform, his evolution as an artist, his creative process, and why he chose New Orleans to record his new album. Stay tuned for Part Two, which further explores the making of Real People (and promises much more witty banter). (Editor’s note: Part Two is here.)

Oakulture: Feelings about the state of hip-hop? Is it in a good place?

Lyrics Born: That question is so hard for me to answer now. At this point there’s generational differences in hip–hop listeners, there’s stylistic differences in hip–hop listeners, there’s independent vs. major label, that gap is wider than ever now. If you’re asking me, it’s probably the most diverse that it’s ever been. That goes without saying, because of all those factors that I just mentioned.  On the other hand, it’s probably the most intense than its ever been if you are an artist. Your output has to be high, your album cycles, if you do albums, they’re much shorter, the quote-unquote traditional press major label machine, even as an independent, is a lot different now. I think you need to be prepared these days as an artist who wears many many many many hats.  How’s the music? I think the music sounds very immediate to my ears. And that’s all I can say. It sounds like people are making music in the moment. Its good and bad, depending on what you’re into. I like sort of the stream of consciousness, off the cuff, let’s make it, put it on Soundcloud, not think about it too much. I like that aspect. But I also like classic recordings. That’s just a different way of recording music, in my experience. I like it both ways. For me, for my generation of artists, yes, it’s about gaining new fans, but it’s also about really being tight with the fans that you’ve developed, in my case over the past 20+ years. I’m not necessarily–at this stage in my career—looking for a platinum hit. Im just looking to connect with my fans each and every single time I make a record. It’s just different. My career aspirations now are not necessarily to be #1 at radio, as they once were. I wanna continue to make good music for the people that support me. It’s just me and them at this point. 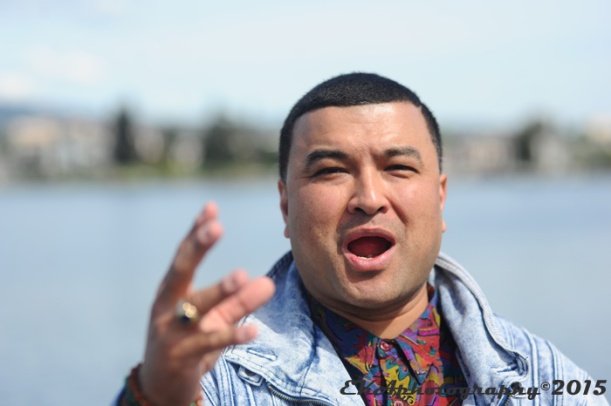 Oakulture: The new record is NOT a very immediate record. You obviously took some time to craft it and make it a very musical record, as opposed to, let’s throw on some Fruity Loops and make a trap hit in ten minutes.

Lyrics Born: There’s nothing wrong with that. I can do that too. 2010, As U Were was kind of an electro-boogie, electro-funk-inspired album, Latyrx’s second album was a very diverse, very experimental hip-hop album. This album, I got all that out of my system,  I wanted to go back to something really funky and organic, and music and very live-sounding. To me, there’s no other place to do that in the world at this point, than perhaps the first and last music town, which is New Orleans. You talk about resiliency, I mean, Katrina couldn’t stop New Orleans. One of the biggest natural and human disasters in American history, and yet, there New Orleans is, still with its sound. The musicians all came back, for the most part. Most of the locals came back… and that to me is really inspiring, to believe in your culture so much that you will return to a place that’s just been decimated. It really speaks to the fortitude of the music and the strength of the culture… for me as a lifelong musician that still wants to learn, where else do I go?

This is my 8th album. I’ve done well over 125 guest features. I’ve done literally what, 1200-1500 gigs in my life,  but I still want to grow, and I still want to learn things as an artist. Where else do you do that, but in a city that’s playing music 24 hours a day? What city can you really say that about? That there’s live music happening… that has a native indigenous sound to it. Where else can you say you can see this seven days a week?

Oakulture:  Let me just pull this back for a second. When you get into the process of a new album, do you feel it’s necessary to reinvent yourself with every album, or is it, here’s another side to me that I haven’t fully explored yet?

Lyrics Born: It’s that. The second part. But ultimately, to people’s ears, it ends up sounding like oh he’s reinventing himself again. He’s rebranding. But really, when I make an album, I’m like, what have I not done yet? That’s really it, what haven’t I done yet?

Oakulture:  It’s interesting, too, because you’ve positioned yourself to be able to do that, from a very long time ago. You didn’t place yourself in a box. Do your attribute your longevity to that?

Lyrics Born: Yeah, of course. You know Karen Dere, from Giant Peach? She told me I was the ‘David Byrne of hip-hop.’ And then I kind of thought about David Byrne’s career and I could see where she would say that. Maybe, maybe. For better or worse, this is the path that I’m on. Until I decide to stop…

Oakulture: Especially looking at Bay Area hip-hop, where there’s now sort of a division between eras. There’s really only a few artists which have transcended stylistic limitations and been active in every era. I’m thinking about you, and I’m thinking about Boots from the Coup. You guys are two guys who have not done the same album over and over again. 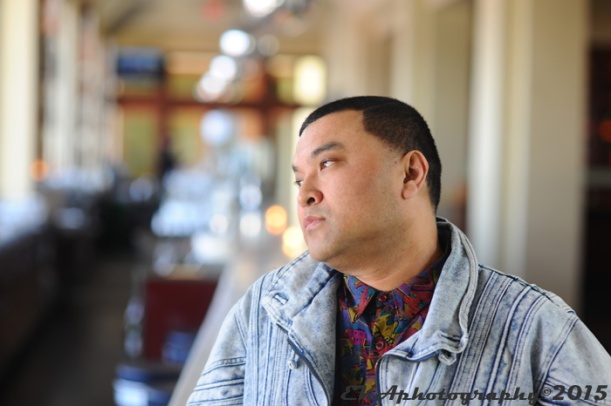 Lyrics Born: For better or for worse… and I think for a lot of people, some people wish I would keep doing Latyrx albums or Later That Day or Everywhere At Once. But I think, honestly, Real People is the closest I’ve gotten to revisiting Later That Day and some of the earlier Lyrics Born stuff. Even though it’s definitely not the same. But it’s probably the closest I’ve done, because it is so organic feeling. In that sense… you talk about Boots, you talk about me, I feel like it is our cast in life to be artists, whether I got a million dollars in the bank or five dollars in the bank. That’s just how I’m wired, and I accept that. I accept it’s gonna be difficult at times. I also accept that it’s going to be very fulfilling at times. I don’t know, I look at a lot of artists, and I don’t know that there’s a lot of artists who have very long careers doing the same thing over and over again. You have to grow.  Even if you’re just growing with in your lane… you don’t necessarily have to make albums with different genres every time, but you do have to grow.

Oakulture: That’s really interesting when we get to hip-hop and start looking at that as a genre, because there’s sort of this unspoken rule that you have to stop doing hip-hop once you get around that 40 year-old mark. When, actually, you might just be reaching your peak—as a lyricist, as a writer, as a stage performer, you have all this experience that you didn’t have when you were 20 or 25.

“When I make an album, I’m like, what have I not done yet? That’s really it, what haven’t I done yet?” -Lyrics Born

Lyrics Born: Right. I think that’s psychological. I think the whole, I’m gonna go X amount of years and then quit. I think that’s all psychological. I remember when we first started, we would read interviews with like the Pharcyde and I would think to myself… because at that time, in the 90s, hip-hop was still a pretty young artform. It was only about 15-20 (years old). It was growing pretty fast, but it was still a pretty young artform. Because it was so young, and because it changed so fast, you didn’t see a lot of artists with multiple albums. Artists at that time would kind of top out at around two or three albums.

But, see, me, being a record collector, being a guy that’s making sample-based music, I would see records by John Coltrane, this guy had 15-20 albums. 30 albums, y’know.  I would see these reggae singers with 40,50,60, who knows?… but you see Miles making 2-3 albums in a year. And hip-hop is a genre that has more commercial viability then those genres did at that time. Why not? Why can’t I? Someone like Art Tatum or Lou Donaldson, one of these jazz guys, they’re making records in their 70s. why cant I if I choose to do so? I’m not speaking to how much they sold or how commercially successful those artists were, but it’s right there… So, that changed my idea, and then when I started to hear guys say, oh I’m gonna quit at 40, how’s that gonna look? That’s all psychological. It looks how you want it to look. Certainly when you hit 60, 70, it becomes physically difficult, you might have other priorities in life, your body changes, but … as long as I have that spark and that desire, I’m gonna keep going.