It’s hard to believe it’s been five years of Hiero Day already.  Originally a day-long hip-hop block party held on San Pablo St. in Oakland, the event has gotten bigger every year – in terms of both attendance and prominence – while relocating to an industrial section of West Oakland, where it now commands several city blocks and three stages worth of live music and DJs.

The members of Hieroglyphics — Oakland’s OG hip-hop pioneers, and one of the few still-active crews hailing from the early ‘90s Golden Age  — have stated on the record they started Hiero Day because it was difficult for them to book shows in their hometown (despite the fact they’ve toured all over the country for decades and their shows have never been associated with violence.) There may be some truth to that, but Hiero Day is about so much more than its eponymous founders. True, they close every show with a full crew performance, but the event has already become a cultural institution, a celebration of real hip hop which draws a multigenerational audience to hear both emerging and veteran artists.

But Hiero Day is not just a concert, it’s a ritual of sorts – an affirmation that hip-hop culture not only still exists, but is still vital and vibrant. One might even go so far to say the day is imbued with spiritual significance; the level of appreciation from both performers and attendees is that high. Even with crowds which now number upwards of 20,000 folks, Hiero Day is overall a super-chill event whose vibe is surprisingly low-key, considering its magnitude

2016’s edition of Hiero Day may have been the best yet.  Advance tickets were available for the quite-affordable price of $19.93, and day-of tickets were a still-reasonable $40. Compare that to the price of any corporate music festival put on by a major concert promoter, and you’ll see quite a difference. We won’t name names here, but some of the larger festivals charge one hundred dollars or more for a one-day ticket for shows which might feature just one or two hip-hop/rap acts amidst a bucketload of indie rock or EDM acts. Even the few national rap fest tours which still exist can’t surpass Hiero Day’s lineup; the most-comparable event in recent memory was probably the on-hiatus Paid Dues Festival. But even that event, which did offer a showcase for underground/indie/alternative/true school hip-hop, didn’t have the grassroots flavor of a 100% artist-produced show which made no concessions whatsoever to corporatism.

There were 43 pre-announced artists, groups, or DJs on the Hiero Day bill – which calls into question one media outlet’s assertion last year that the show was more of a self-serving platform for Hiero and veteran acts than a showcase for up-and-coming artists. That just sounds ridiculous, since roughly two-thirds of the total stage time this year was allotted to newer acts with younger followings. The actual number of performers was actually a bit higher than what was announced, to boot. For instance during Just Blaze’s DJ set, he called up Del the Funky Homosapien, Locksmith, Ras Kass, and Planet Asia to do freestyles. That’s what you call more of what you’re funkin’ for.

That said, for both Hiero fans and hip-hop OGs, it was hard to pass up the allure of the main, “Infinity,” stage for sheer hip-hop flavor. Impressively, the stage featured a solid five-hour block of quality artists leading up to Hieroglyphics closing set: Paris, X Clan, Lyrics Born, Murs, Just Blaze, Invisibl Skratch Picklz, and Too Short. Other stages were graced by the likes of Juvenile, Dilated Peoples, Blu & Exile, the Grouch, Nef the Pharaoh, Rocky Rivera and others;  however, going from stage to stage required an adventurous spirit and a willingness to navigate between crowds of considerable density and brave the late-summer sun. By late afternoon, the crowd swelled to the point where it was quite dense with bodies. Oakulture made one foray out to the “Third Eye” stage, and briefly caught a bit of Blu & Exile’s set, but quickly returned to the Infinity stage in time to catch another Bay Area legend, Lyrics Born. Add to the fact that the Infinity stage offered the best photo opps for candid backstage shots, and it was pretty much a no-brainer to post up there.

Dan the Automator and Dante Ross

The question remains: Where else are you going to see legendary A&R Dante Ross cold chillin’ with legendary producer Dan the Automator, or such local notables as Hip Hop TV’s Shawn Granberry, Boots Riley, Mystic, Davey D, Chuy Gomez, Bijan Kazemi, DJ D-Sharp, Purple Pam the Funkstress, Councilmember Abel Guillen, and the occasional member of Hiero? Needless to say, many conversations were had, and much game was chopped.

It was difficult to feel too salty about missing Cash Money mainstay Juvenile or LA rhyme-spitters Dilated Peoples, because the Infinity stage was crack-a-lackin all day. Paris got the crowd pumped up with his Black Panther-inspired message rap; the self-proclaimed “hard truth soldier” played new material from his recent album Pistol Politics, but it was the 1990 “conscious yet hardcore” hit “Break the Grip of Shame – which samples both Malcolm X and Public Enemy – that  got the crowd to raise their fists in the Black Power salute. Shout out to DJ True Justice, by the way, who flawlessly recreated Mad Mike’s  frantic scratch solo.

It was the pre-mainstream gangsta, pre-mumble rap era all over again when Brother J came out next to play some X Clan classics. Can we just say here that Brother J is one of the most underrated yet crucial emcees of all time? Back in the so-called Afrocentric era, he was no less inspirational and influential than Chuck D or KRS-One — some forget X Clan sold hundreds of thousands of records —  yet has been nearly forgotten as time has advanced. Listening to opuses like “Grand Verbalizer, What Time is It” played live, however, made J’s contribution to hip-hop readily apparent.

By the same token, you can’t front on Lyrics Born, who has amassed a formidable catalog of crowd-pleasing jammy-jams to go along with his crowd-pleasing persona and inimitable rhyming and singing skills. One of the defining artists of alternative hip-hop, LB’s originality shone through yet again on songs like “Don’t Change,” “Lady Don’t Tek No,” and “I Changed My Mind.”

It was also good to see that the Invisibl Skratch Picklz are back to playing live sets. Some people might remember how they burst on the scene in the early 90s, with amazing demonstrations of turntable techniques framed around band aesthetics. If they’re somewhat less jaw-dropping in their current incarnation of Shortkut, D-Styles, and Q Bert, it’s only because their innovations have been widely imitated by subsequent generations of turntablists. But anyway, they symbolized the original icons of hip-hop—the DJs—and stayed true to their ethos, with each member rocking a single turntable.

The best performance of the day, however, may have been Too Short’s. The pioneer of Oakland rap as well as independent hip-hop, Short’s predilection for nasty lyrics has overshadowed his undeniable skill as a live performer, as well as his penchant for dropping nuggets of wisdom into his material. He also has quite an affinity for funk, a primary influence on much of his classic material. Short was a commanding presence at Hiero Day, soaking up the proceedings with the air of an emcee claiming his cultural authenticity in a city he basically built from the ground up. And did we mention the man’s got classics? From “Blow the Whistle” to “Gettin’ It,” he played a nice selection of his catalog, rocking the crowd but barely breaking a sweat. (By the way, when was the last time anyone saw Too Short AND X Clan at the same show? Probably the 90s, when diverse bills within hip-hop shows were commonplace.)

Gettin’ It: Too Short

It doesn’t really get any more “Oakland” in terms of hip-hop than following Too Short with Hieroglyphics. Taken together, the two have defined The Town’s hip-hop culture for three decades.  Both keep making new music, but it’s their respective track records which place them among the greats of all time.

At this point, we’re not even sure what can be said about Hiero which hasn’t already been said over the years.  Some might argue they’ve stayed relevant because they’ve continually reinvented themselves, but one could just as easily say the opposite as well: that in actuality they’ve stayed true to the style they had back in 1992, when they first appeared on the B-side of a Del record. What is undisputed is that they’ve somehow managed to continue to attract a younger audience while also maintaining appeal to longtime listeners. That creates an interesting audience dynamic which seems somewhat universal: Hiero fans cross all racial/ethnic, age, economic and class lines, a diverse bunch united by their love of hip-hop. 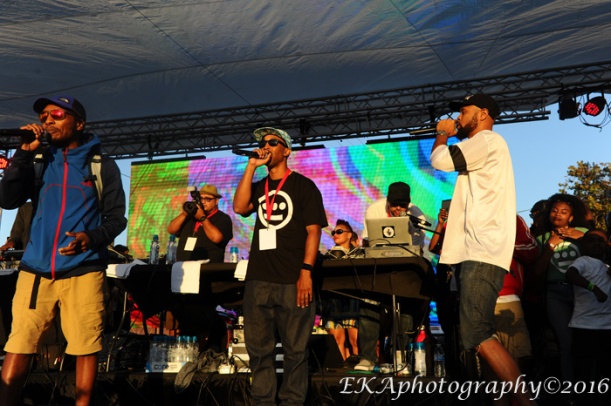 Though Hiero didn’t do a full set, it’s always great to see a whole crew performance by them, especially because their catalog is so thick, they can pull out deep cuts at any time. While Del, the crew’s founder, perhaps gives off the most “star vibes,” sleeping on any member of the group’s lyrical skills or stage acumen would be a huge mistake. There’s not a single member of Hiero, except for maybe producer Domino and DJ Toure, who isn’’t an excellent rhymer. And they’ve all been rocking stages for so long, they’re unlikely to be fazed by much. As dope as Del is, any of the other members – Casual, Phesto, Tajai, Opio, A-Plus and Pep Love – are capable of captivating with intricate wordplay and devastatingly rhythmic tonal patterns. They are quite literally a throwback to another era, when skill and originality were cultural values. As usual, they closed their set with the anthemic Souls of Mischief hit “93 til’ Infinity,” gently bringing to an end a day which reveled in the most positive aspects hip-hop – and Oakland – have to offer. What more can be said? Not much, except there are only 360 or so days until next year’s Hiero Day.