It’s perhaps no surprise that ground zero for Oakland’s much-ballyhooed cultural renaissance has been the Uptown area, a region centered around the Fox Theater. After all, the city poured in upwards of $90 million to renovate the art deco auditorium, so it makes sense that much of the emerging nightlife, not to mention the monthly First Friday street festival, has been within a half-mile-to-one-mile radius of the Fox.

Zigaboo Modeliste plays with the New Aahkesstra at Leo’s

But for Oakland to truly be an arts city and cultural destination, it’s in everyone’s best interest to cultivate other sectors of the Town. That’s why it’s gratifying for longtime Oakland arts enthusiasts to see the beginnings of arts districts in areas other than Uptown, and the development of new venues for music and arts. Two recent additions to the nightlife scene in Temescal and nearby North Oakland have done just that: Leo’s Music Club and Birdland Jazzista Social Club. 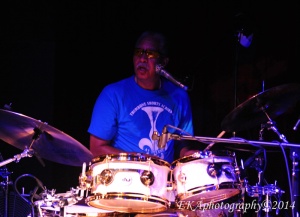 Leo’s takes its name from the former pro audio shop located there, which was the place to buy musical equipment in the days before Guitar Center. This lends it some unique character and history, as well as a particularly advantageous facet: the place has excellent acoustics and is what you’d call a “loud” room. The dimensions are such that the sound bounces quite easily from the stage area to the slightly tilted ceiling, which should make it especially attractive for acoustic acts. It also makes for better views for the audience, whether you’re in the front or the back. It’s a small but cozy room, with a capacity for 200 or so folks, although it only takes a quarter of that to make it sound full. Operated by the Parish Entertainment Group, who also own the New Parish and Brick and Mortar, Leo’s plugs a needed hole—that of a smallish, professional venue outside of Uptown’s nightlife nexus. 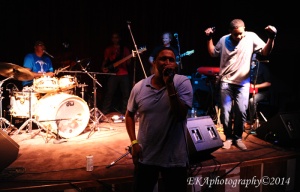 Thusfar I’ve seen two shows at Leo’s: STRFKR and Zigaboo Modeliste and the New Aahkesstra. For the former, an indie/alternative rock act, the background lights were set to full disco illumination. Glam on. But for the latter, the lighting changed up and was much softer overall. That suggests Leo’s is a chameleon, a venue which can adapt according to who’s inside on any given night.

Members of the New Aahkesstra

A quick word about Zigaboo: do Temescal residents know how lucky they are to have a legend like him play in their neighborhood club? Modeliste is, of course, the original drummer of the Meters, “the” NOLA swamp funk band, and one of the most-sampled drummers in history. As a skinsman, he’s still top-notch, and the opportunity to play authentic New Orleans-style funk explains why he was surrounded by young sidemen with chops. Modeliste also supplied a fair amount of lead vocals, and most of the band’s originals were party-oriented jams with lots of call-and-response chants.

This cat can blow!

What makes a music club special is the feeling that anything can happen, and that expectation was totally vindicated by a cameo by CB of jazz-hop veterans Alphabet Soup, who rocked an energetic freestyle rhyme that got the crowd into it. Another special moment happened when a guest trumpeter–i didn’t catch his name–sat in and added some brassy punch to the Aahkesstra’s vibe. Though it’s technically a “new” venue, Leo’s has a bit of an old-timey feel to it. I wouldn’t be surprised if it becomes a go-to spot for bands with enough of a following to sell out a small-to-medium venue. And it’s a no-brainer as a drop-in place to catch a show and check out the crowd for Temescalians, who have long lacked a neighborhood live music club.

Moving right along, how does one even explain Birdland to someone who’s never been there? Let’s try: jazz space, blues space, salsa space, flamenco space, comfy feel, great ambience, low-key vibe. That’s for starters. Oh yeah, the walls are lined with birdhouses everywhere, and there’s a hookah lounge in the back. A former speakeasy gone legit, the Birdland Jazzista Social Club is probably the best new live venue in Oakland, in spite of itself.

Remember those special moments I talked about, awhile back? In just a few weeks, I’ve seen jazz guitarist Terrence Brewer, the debut of the monthly Oakland Flamenco Sessions with guest cantor MC Rai, and Chilean emcee Ana Tijoux with her live band. That’s a lot of heat for just one venue.  Every weekend, the venue hosts two full programs of live entertainment, and they’ve just added a Salsa program (“Salssista”) on Sundays. There are also classes and workshops, with more TBA.

But the best part of Birdland is the effect it’s had on the neighborhood. Jazzista #1 “Birdman” Mike Parayno, aka “Kuya Meng” and his team of volunteers have helped to organize several other venues in the neighborhood — including Marcus Books and the MLK Cafe — to create a pop-up arts district, with plans to hold a monthly festival. That’s creative placemaking at its best. Since the venue is at present a private club and BYOB spot, holding a BJSC membership card even gets you a discount at the two local liquor stores – that’s called going the extra mile.

Having said that, in the interests of full disclosure, I should also note that I am the official Birdland photographer and have known the Birdman for fifteen years; also, my girlfriend is the promoter of the Oakland Flamenco Sessions. But BJSC clearly stands on its own merits: its move to its new nest accumulated an armful of positive press without Oakulture stoking the fire, and positive press around the cultural arts is exactly what Oakland needs more of, especially in parts of town which are not Uptown. 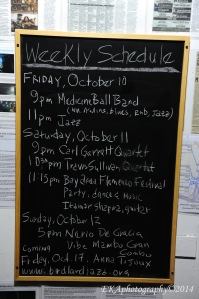 It wasn’t that long ago that nighttime robberies were common a few blocks down at the legendary Eli’s Mile High Club, which happens to be in “Ghosttown,” and has turned into primarily a punk/indie rock spot (with an in-house tattoo parlor) under current ownership. While MLK Ave can still be sketchy late at night, Birdland—which is just north of the Ghosttown “border”—has brought authentic blues and jazz back into the area, and even has a tuk tuk-style shuttle for patrons using BART (just two blocks away). With every week that passes, it seems to become more a part of the cultural fabric of the neighborhood, and a good example of organic development fueled by culture-keepers – as opposed to inorganic gentrification fueled by developers.