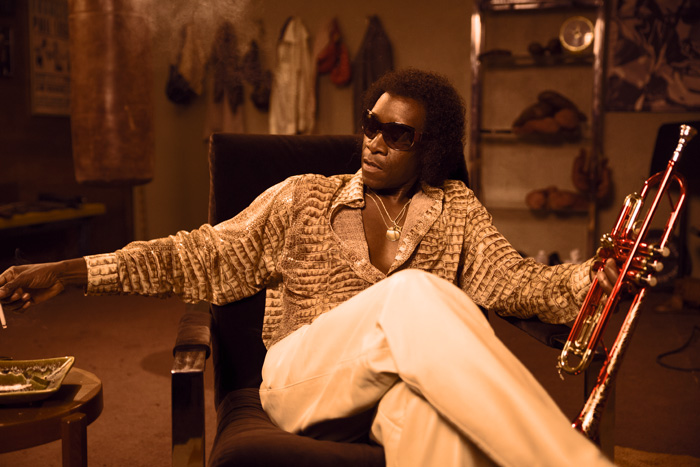 In 1976, after 30+ years as a bandleader, recording artist and jazz superstar, legendary trumpet player Miles Davis took a hiatus from recording and public appearances. His disappearance from the limelight was hastened by poor health—he reportedly suffered from an ulcer, a hernia, osteoarthritis, sickle-cell anemia, bursitis, and depression—yet it’s also entirely possible he was experiencing creative burnout as well.

Davis wasn’t terribly interested in revisiting where he’d already been; simply making another Kind of Blue or Sketches of Spain seemed beneath his artistic sensibilities.

After pioneering jazz-fusion with 1969’s In A Silent Way and 1970’s Bitches Brew, incorporating rock rhythms as well as experimental recording techniques such as tape loops, Davis forayed into dense Afro-futurist funk on 1972’s On the Corner. The album is widely recognized today as a genius-level musical statement, but at the time, it offended jazz purists (which may have been an intentional move on Davis’ part). Later mid-70s studio releases Big Fun and Get Up With It weren’t terribly well-received, either, and a slew of live releases from this period, including Dark Magus, Agharta, and Pangaea, continued this polarizing trend, despite their out-of-the-box use of electric effects, electric guitar, and even electric trumpet. Evidently, Davis wasn’t terribly interested in revisiting where he’d already been; simply making another Kind of Blue or Sketches of Spain seemed beneath his artistic sensibilities. Instead of crafting museum-piece monuments to jazz history, he kept trying to connect with a younger zeitgeist, which by this time included psychedelic rock, way-out funk, and worldly hybrids of ethnic instrumentation.

After being hospitalized while on tour, Davis returned to his New York pad and went into self-imposed exile. He became somewhat of a hermit and stopped practicing trumpet regularly. He continued to compose, however, and made several abortive attempts at recording new music, all the while dealing with considerable substance abuse problems. His exile lasted five years, until the recording of his comeback album, The Man With the Horn (recorded in 1980-81 and released in 1981).

Curiously, it’s the tail end of Davis’ exile period that actor, director and co-writer Don Cheadle zeroes in on in “Miles Ahead,” a new biopic produced with the cooperation of the Davis estate (which means, unlike recent Jimi Hendrix and Nina Simone movies, there’s plenty of Miles’ music included).

Why, one might ask, would Cheadle choose of his own free will to place his film during Davis’ least-prolific period, a time when by the trumpeter’s own admission,  he was little more than a drugged-out wreck, living almost entirely in his own head?

There’s a simple answer to that. Cheadle is a character actor, and “Miles Ahead” is primarily a character study. Freed from the moorings of having to recount Miles’ rise to fame, and the minute details of his most celebrated recordings, Cheadle burrows deep inside Davis’ skull, in an attempt to reveal a man who was more than the sum of his music.

Why, one might ask, would Cheadle choose of his own free will to place his film during Davis’ least-prolific period?

The portrait he sketches here is one of a larger-than-life individual who carried fame with the casualness of a keychain. Miles is simply Miles, no last name necessary. Cheadle doesn’t entirely disappear within the role, but he comes close. The actor was first linked to the role about a decade ago, and it’s clear he’s done his research.

While Cheadle’s Davis may seem over the top at times—this is a loud, brash, entertaining film—there’s also plenty of subtle nuances, if you look hard enough (and a superb score by Robert Glasper which largely flies under the radar). Cheadle absolutely nails Davis’ hoarse whisper of a voice. He evokes Davis’ famous temper and violent rage, although the sexual perversion and misogyny also associated with him are only hinted at – perhaps due to the need to make the lead character seem sympathetic—which he is, mostly.

In life, Davis was a dark, if mercurial, man. On celluloid, portrayed by Cheadle, his comfortability with his shadow is like a superpower he wields whenever he faces conflict. He’s just too cool and too black, and he knows it. This is clearly evidenced by the fictional relationship between Davis and a magazine reporter played by Ewan McGregor.

In life, Davis was a dark, if mercurial, man. On celluloid, portrayed by Cheadle, he’s just too cool and too black, and he knows it.

McGregor’s role is that of Hollywood buddy, yet within that context he somehow manages not to be a complete dork. He is the square who is rebirthed in coolness from merely associating with Davis. In the course of the movie, McGregor snorts lines, drinks liquor, and accompanies Davis in a mission to retrieve the movie’s enigmatic MacGuffin – a reel to reel tape of a studio session. McGregor upgrades from Brit twit status when Davis gives him a stylish blue shirt to wear (to prevent him from impinging on Miles’ cool factor by being sartorially unprepared), and finally achieves hipness in his own right, by mastering Miles’ favorite epithet, “motherfucker.”

McGregor’s a fine actor, but his role is not played for utter believability. Few music journalists, for instance, have actually gotten into shootouts with the bodyguards of rival managers while tracking down a story. And few would witness a music superstar shake down execs at a record company’s office, and then say, they’d rather write the real story. 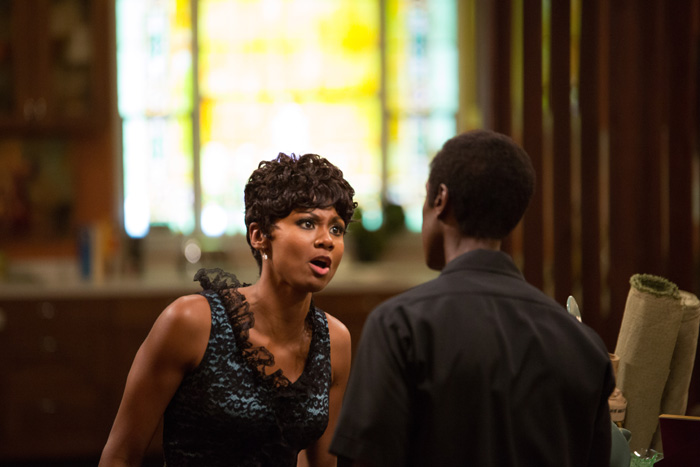 Essentially, McGregor is there so that Cheadle has someone to bounce “motherfuckers” off of; otherwise, we could have had a far more insular movie consisting of just Cheadle as Miles talking to himself and looking regretfully at his past album covers with ex-flames displayed prominently. That might have been cool, too, but it would have confined the film to avant-garde status, and limited its populist appeal considerably.

Cheadle’s Davis is a piece of work. He’s a black man with rock star status, a host of personal demons, and a one-in-a-million talent who has forgotten his ability to even blow a solid note throughout much of the film… More than just a jazzman, he’s presented almost as a Blaxploitation hero, an Afro-Sheened superfly dude whose own contradictions enhance rather than limit him as a culture hero.

“Miles Ahead” is not a by-the-numbers biopic. It probably won’t appeal to people looking for a Cliff Notes summary of every notable musical thing Davis ever did, and the celebrity cameos are almost non-existent, until the film’s end. The flimsy, circular plot takes a backseat to character development, and the one plot device which actually moves the story – other than the frequent flashbacks to a younger Miles – does so in an ironic and somewhat anticlimactic way. But rather than nitpick what isn’t in the movie, we can simply appreciate it for what it is.

Cheadle’s Davis is a piece of work. He’s a black man with rock star/style icon status, a host of personal demons, and a one-in-a-million talent who has forgotten his ability to even blow a solid note throughout much of the film. He has no moral qualms about strong-arming record executives to buy cocaine to feed his habit, throwing a quick punch at an unexpected visitor, or shooting out the window of a moving car. More than just a jazzman, he’s presented almost as a Blaxploitation hero, an Afro-Sheened superfly dude whose own contradictions enhance rather than limit him as a culture hero.

It helps, too, that we get liberal doses of Miles’ music throughout the film, from “Blue in Green” to “Solea” to “Black Satin” to “Nefertiti.” That adds context to what is being presented on screen – a period where Miles made almost no music – and fills in the plot holes by suggesting a much deeper backstory than what we see.

The film departs from historical fact so frequently, it soon becomes clear that’s not the point. Rather, “Miles Ahead” offers parable as metaphor, folktale as fable. We get frequent flashbacks to Miles’ wooing – and subsequent post-conquest arguments with – Frances Taylor, a black beauty who in real life graced three of his album covers, played by Emayatzy Corinealdi. However, by 1979, Davis had reunited with his former wife Cicely Tyson, who is never mentioned in the film – nor is Betty Davis, Miles’ muse during the Bitches Brew period, and a funk diva in her own right. Many other details are also fictionalized; the filmmakers chose to emphasize the feeling of being in the presence of Miles over pinpoint accuracy.

The abrupt ending is a case in point. Instead of seeing Miles reunite with his true love and gradually get a new band together for what would become The Man With The Horn sessions, we get a flash-forward into an alternate universe, where Davis jams with an all-star band of contemporary artists, among them guitarist Gary Clark, Jr. , pianist Robert Glasper, and bassist Esperanza Spalding. The two connections to actual history are pianist Herbie Hancock and saxman Wayne Shorter – who played with Davis, in his legendary “second Quintet.” Though this fictional concert comes off as a little heavy on the glitz, it’s intended to drive home the point that Davis’ legacy lives on, that his legend didn’t stop with Kind of Blue or Jack Johnson. But it also makes an unintended, ironic point, that fiction is stranger than truth.

Does it work? Mostly, although the flashier scenes tend to obscure the nuanced subtleties which are the film’s true strength. Don’t be surprised if the music stays in your head long after the credits roll and you subsequently find yourself on a Miles binge, either.

One thought on ““Miles Ahead”: A Jazz Legend’s Lost Period, Revisited”